As he approached the rim, he began to smell the smoke. The terrain and rocks under his feet were a color and texture foreign to his experience. Suddenly he was there, and his gaze fell deep into the crater toward the glow of fire in what the locals call, “The Mouth of Hell,” the Masaya Volcano in Nicaragua. Wrestling with his sense of danger, it helped to recall inspecting the eerie confines of a witch doctor in Haiti and braving the murderous streets of Ciudad Juarez.

This could begin the fictional, fanciful tale of an unfulfilled adventurer. But it could be a true story with witnesses still alive that could authenticate the details.

A fabricated story widely published as true wouldn’t take long to unravel. That’s what happened in 2003 when Jason Blair lost his job with the New York Times over made-up stories. Perhaps worse, journalist Janet Cooke had to return a Pulitzer Prize for a story she fabricated. Late in 2014, the false Sabrina Erdely story in Rolling Stones magazine did great harm to the University of Virginia. In these cases people read the stories and knew they were not true, and made noise about it.

This idea forms one of the reasons you can believe the Bible. It is not a collection of philosophical musings or arbitrary morality. It is a narrative that contain specific details of places, times, and people while revealing truth about God and people. Wouldn’t it make sense that if God were to reveal truth via the written word, He would include historical, verifiable details about real people so it would be plausible? Indeed, at the times the various books of the New Testament were written, the people in the stories were still alive! The books were copied and distributed far and wide with no fear that someone in the story would show up and declare, “Hey, that didn’t happen!”

Paul makes that point himself, writing about all the people who witnessed the resurrected Christ, “He appeared to more than five hundred brethren at one time, most of whom remain until now” (1Cor 15:6). He was using their experiences and living witness as proof of truth. Besides, why would Christians maintain a collective lie while enduring the withering persecution the early church faced?

The Bible is trustworthy. Sure, it has been misaligned, misused, and misunderstood. But its purpose remains to reveal that God invites you to trust the Jewish Messiah, sent to take away the sins of the world. That’s good news!

By the way, I’d be glad to recount the tales of my travels to Nicaragua, Haiti, and Juarez to anyone willing to listen (and I have witnesses)!

I have a friend who once patted his ample belly and pointed to his waist-line. “This ain’t a belt. It’s a leather fence around a chicken graveyard!” I share his taste for the most common species of bird in the world, so I welcome the news of Chick-Fil-A coming to our town.

But it’s not just their recipe (other eateries have good chicken, too!) that’s attractive. Their founder, Truett Cathy, adopted a corporate purpose statement that includes this: “To glorify God by being a faithful steward of all that is entrusted to us.” The business environment he created attracts dedicated people who must not check their faith at the door of their workplace.

A Facebook meme reports that the manager of a Chick-Fil-A in Birmingham noticed a homeless man that came in to escape the cold. He found warmth from the manager who gave him his gloves and a free meal, inspiring the patrons who witnessed the kindness.

This simple act, not meant to be noticed or published, captures more about the latest churchy buzzword ‘missional’ than many books that try to explain it. ‘Missional’ is a new attempt to explain old ideas about faithful living.

Christians are a sent people. As Christ was sent to us, he sends his followers on mission to a world darkened by the absence of Truth. He said, “You are the light of the world. A city set on a hill cannot be hidden…Let your light shine before men in such a way that they may see your good works, and glorify your Father who is in heaven.”

Authentic faith roams freely and acts unexpectedly, not displayed behind stained glass, illuminated by chandeliers. It notices and addresses people, their hurts and needs. If the totality of religion is to attend a service or volunteer for an activity, is that a life that exists to glorify God with all that is entrusted to it? Is that a life that serves others in a way that makes them wonder ‘why would you do this?’

We live in a world that is increasingly post-modern and post-Christian (i.e. everyone can have their own truth except Christians). Yet if Jesus gives us the ability to love our enemies and pray for those who persecute us, then a kind act, generous gift, encouraging word shouldn’t be too hard to muster. It lights the world when an affected life displays the love of God to the human condition.

We say we want to be like Christ. Well, consider that his ministry was incarnational, (he touched people personally), and sacrificial (it cost him). Missional living can be no less, can it?

I first noticed his British accent. Later I learned that what he had to say was even more impressive than the way he said it. I was at a conference a few months ago, and sat down to enjoy breakfast with my fellow attendees. It was providential that I sat next to Rob Gifford, the China Editor for the Economist magazine. 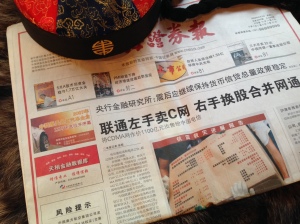 He is certainly credentialed for the job: Harvard-educated, fluent in Mandarin, well traveled as documented in his book “China Road.” Our conversation quickly turned from polite aquainting to my persistent questioning. He recently completed an article, “Cracks in the Atheist Edifice,” and I was anxious to hear the details.

He spoke of a city, amazingly nick-named ‘China’s Jerusalem’ due to its population of Christians. Many churches there that do not meet in homes have had their buildings demolished recently. This sad destruction notwithstanding, the communists are gradually allowing more religious freedom in China. Some members of the ruling party are now Christians, and many believers are emerging from the shadows to active roles in the community. Many demographic experts agree that there are now more Christians than communist party members.

China has a long history of Christian missionary work. Robert Morrison translated the Bible to Mandarin by 1819. Coming later were Hudson Taylor, Lottie Moon, Eric Liddell, Bill Wallace, and Bertha Smith. Many missionaries to China, including some of these, were ignored, arrested, imprisoned, tortured, and murdered without seeing much fruit from their labor. If they could only witness the growing tribe of Christ-followers in China today!

They knew our God is not restrained by time. We tend to look for results now if we sacrifice or serve, but sometimes the check is cashed after we are gone. Endurance is a trait of the faithful, regardless of results seen in this life. We cannot faint from past failures nor rest on past successes.

Where does this endurance for faith and life come from? It comes as believers from Georgia and England share news of the faithful in China. It comes from an awareness of those who have gone before and who finished well. We are a community that spans time and geography, bound by our common heavenward gaze upon the One who authored our faith.

“Since we have so great a cloud of witnesses surrounding us, let us also lay aside every encumbrance and the sin which so easily entangles us, and let us run with endurance the race that is set before us, fixing our eyes on Jesus…” (Heb 12:1-2).

It is a difficult world we live in, but we are not without hope. We know Who to trust, and how to have an enduring faith.

I’m not big on New Year’s resolutions. I doubt I’m alone, especially by the time Valentine’s Day arrives. It seems better to think about finishing something, not just trying hard to start something that should have been done a long time ago anyway. Surely you’ve heard a sage in your life say, ‘don’t start something unless you can finish it.’

I am a Georgia man, but Auburn educated. Early this football season I enjoyed the high ranking of so many teams from the SEC West, and all the chatter about how dominant our division was. Such power made it easy to explain away the intra-division losses. Commentators crowed about the possibility of two SEC West teams in the new playoff scheme. Problem is, we didn’t finish well. Auburn didn’t, for sure, unless you count a new defensive coordinator as the highlight of the season.

Finish well. That’s not a goal, but a lifestyle, which applies to faith, too. I have observed in over a half century of life and decades as a pastor, there is a caricature of faith that turns away the unbeliever and discourages the believer, so neither finish well. G.K. Chesterton said, “Christianity has not been tried and found wanting; it has been found difficult and not tried.” The past is a graveyard of good intentions slain by the belief that Christianity is just a strict and high moral code to keep.

The Apostle Paul said, “I have fought the good fight, I have finished the course, I have kept the faith.” Was it traveling the world, planting churches, shaking off a snake bite, speaking to rulers? Was it keeping all of his New Year’s resolutions that led to this self-congratulation? Doubt it. He finished well because he counted “all things to be loss in view of the surpassing value of knowing Christ Jesus my Lord.”

This caricature of faith I mentioned omits the relationship. Authentic faith is about the person of Jesus, God the Son, the one who loves you. It embraces change wrought by God. Consider that “it is God who is at work in you, both to will and to work for his good pleasure.” Faith in Jesus means a new life lived by a moral code written on the inside.

Seems that God would be more than willing to answer the prayer, ‘if you’re really there, help me know you.’ Finish well by finding the surpassing value of knowing Christ. Come to think of it, that would be a good New Year’s resolution!