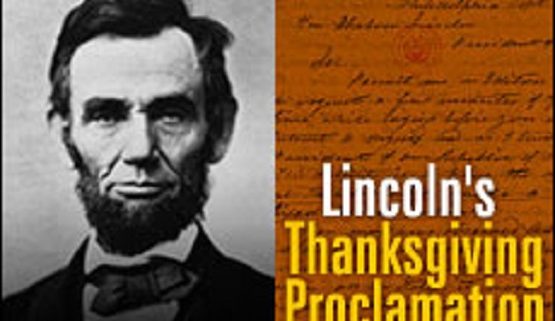 We are a nation divided. National election results are so close to 50-50 that polls cannot predict the outcome.  Both sides ask the question, “How can they even conceive of voting for that person?”  Americans are frustrated over sharply different philosophies of government.  Our most notable disagreement in history resulted in the horrific Civil War.  Our response now can be well informed by what Abraham Lincoln did then.

Writing to various presidents for 15 years, Sara Hale lobbied for a national Thanksgiving observance on a fixed date. Lincoln agreed with her.  On October 3, 1863, 74 years after George Washington’s first thanksgiving proclamation, and juxtaposed with the Battle of Chickamauga and its 33,000 casualties just two weeks prior, Lincoln called for a national day of Thanksgiving on the last Thursday in November (later changed to fourth Thursday).

His 500-word proclamation still rings true. Lamenting that Americans are prone to forget the source of our blessings, he listed them beginning with “fruitful fields and healthful skies.”  Despite the War, “peace has been preserved with all nations.”  The War had not “arrested the plough, the shuttle or the ship.”  He noted increased development and population, the productivity of mines and industry, and the growth of the nation.  “No human counsel hath devised nor hath any mortal hand worked out these great things.  They are the gracious gifts of the Most High God.”

Lincoln also urged “humble penitence for our national perverseness and disobedience” and petitions for “all those who have become widows, orphans, mourners or sufferers in the lamentable civil strive.” He closes with a call to pray for “the Almighty Hand to heal the wounds of the nation and to restore it as soon as may be consistent with the Divine purposes to the full enjoyment of peace, harmony, tranquility and union.”

Americans are still blessed for what we have, and for evil things that were not but might have been. We need forgiveness for the perversity of our times, and compassion for the defenseless and less fortunate among us.  But above all thanksgiving implies a source, and Lincoln rightly understood that we thank the Most High God and submit to His purposes for our nation.

The current strife has many faces. Riots in the streets.  Pejoratives on our tongues.  Anger on social media.  It doesn’t have to be that way.  When we see the “Imago Dei” in one another, we cannot harbor such acrimony.  If Lincoln could find reason to be thankful, surely we can.

Let them give thanks to the Lord for His lovingkindness, and for His wonders to the sons of men!  For He has satisfied the thirsty soul, and the hungry soul He has filled with what is good (Ps. 107:8-9).