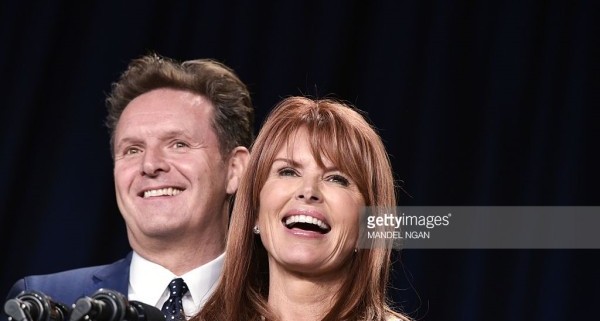 The National Prayer Breakfast is an annual event in Washington DC on the first Thursday in February.  It is hosted by members of both political parties in a rare show of unity.  The addresses by the various speakers are an annual update on culture and faith in America.

The keynote speakers this year were Mark Burnett and Roma Downey. This married couple are among the most influential people in Hollywood.  He is President of MGM Television and she is a producer, though most remembered for her role as angel Monica in the TV series, Touched by an Angel. Together, they produced the miniseries The Bible for the History channel (2013), feature film Son of God (2014), and A.D.: The Bible Continues (2015) for NBC.

In Touched, you may recall that each episode had a scene which revealed the angel’s identity. Downey said, “Every week Monica offered a message of God’s love on national television to millions.  It was such an honor to share that there is a God that loves us and wants to be part of our lives.”  She explained that before every revelation scene, she and others gathered to pray, “Less of me, more of you.”

When Downey and Burnett began to plan a new series based on the Bible, their friends warned them that mixing entertainment and religion would destroy their careers.   But The Bible became the #1 show of the year with 100M viewers. Downey said, “Faith is alive and well in America!  The series helped ignite a larger conversation about God and faith.  We were Hollywood producers daring to talk about faith in Jesus.”  Rick Warren once told them that the most dangerous prayer is “Lord use me” because He might just do so.

Between scenes of The Bible shot in the Moroccan Desert, the cast and crew read scripture and prayed about emotional, spiritual, and physical challenges.  One challenge was snakes, as the wrangler removed one or two per day.  During the crucifixion scene, the wrangler found and removed 48 snakes.  “The symbolism of the snakes wasn’t lost on us,” Downey noted.

After her inspiring stories, Downey issued a challenge. “We believe it is far more effective to light a candle than to curse the darkness.”  She observed that America is divided by race, religion, and politics.  Her challenge is that each one find a dividing line, and build a bridge of peace.  Jesus guides us in this with, “By this all men will know that you are My disciples, if you have love for one another.”

Downey closed by asking us to pray that “with God’s help our world can heal some of the hurts that wound us and the confusion that divide us.” A good place to start is to see the image of God in everyone you meet.

(You can view the National Prayer Breakfast on YouTube or C-Span.)