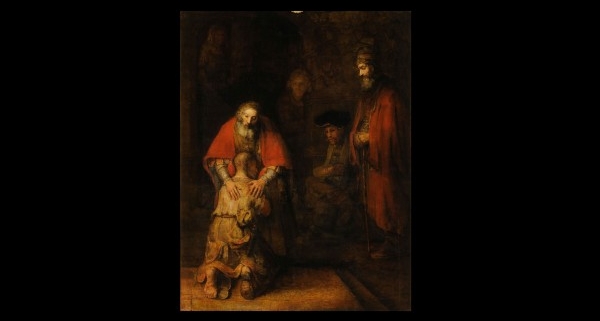 One of the last paintings Rembrandt completed (1669) was “The Return of the Prodigal Son.” This impactful art piece, about eight feet tall and wide, is in the collection at the Hermitage Museum in Saint Petersburg, Russia.

The subject of the painting is the final in a series of three stories as told by Jesus (Luke 15). The sheep, coin, and son share the theme of something lost, yet found.  The prodigal son parable is the longest of the three.  At first it’s about a wandering son, but it quickly becomes more about a loving father.  Perhaps that’s why Rembrandt has only the father’s face in full view.

Rembrandt’s masterpiece had a particular impact on Henri Nouwen (d. 1996). Nouwen was a Dutch academic in psychology and theology.  After being a professor at Harvard, Yale, and Notre Dame, he set that career aside.  For the final ten years of his life, he served L’Arche Communities, an inclusive home for the disabled in Ontario.

Nouwen struggled with loneliness, and reflected deeply on Jesus’ parable and Rembrandt’s painting. He visited The Hermitage Museum to see the painting in person.  He was so moved that he authored a book about it, The Return of the Prodigal Son – A Story of Homecoming.  Nouwen writes, “So there I was; facing the painting that had been on my mind and in my heart for nearly three years.  I was stunned by its majestic beauty.  Its size, larger than life; its shadowy recess and bright foreground, but most of all the light-enveloped embrace of father and son surrounded by four mysterious bystanders…It has brought me into touch with something within me that lies far beyond the ups and downs of life, something that represents the ongoing yearning of the human spirit, the yearning for a final return, an unambiguous sense of safety, a lasting home.”

That need for unambiguous safety and a lasting home touches something deep in your soul, and Jesus knew that. Two times Jesus has the father saying that the son was dead and came to life again, was lost but now is found.  Is there anything more threatening than your own mortality?  Can you be more lost than when you have no home?  In the story, the prodigal knows where the father is and returns to him seeking safety, home, and life.  The father waits and watches.  When he sees the son in the distance, he is overwhelmed with compassion and mercy, running to embrace his son.

This is really about you and God. Once you have received the mercy of the Father, mercy becomes your calling.  “Be merciful, just as your Father is merciful,” Jesus said (Luke 6:36).  When you do that, you invite the dead to find life, and the lost to their lasting home.

Not Shaken
Scroll to top