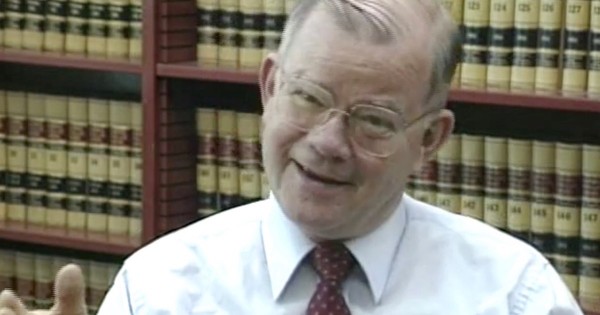 Someone invited Phillip Johnson’s daughter to attend Vacation Bible School at a local church. Though an agnostic at the time, he became interested in what she learned.

He was raised in a Christian home but had never considered the evidence for faith. He graduated at the top of his class at Harvard and clerked for U.S. Chief Justice Earl Warren. He was a professor at UC Berkeley law school when, prompted by his daughter, he investigated and found the gospel credible. He believed.

Some year later he became bored with his career. But he reacted with interest after seeing Richard Dawkins’ comments about evolution. Johnson said, “The rules of argument seemed to be structured to make it impossible to question whether what we are told about evolution is really true. The very persons who insist on keeping science and religion separate are eager to use their science as a basis of pronouncements about religion.” One of Dawkins’ pronouncements was, “It is absolutely safe to say that if you meet someone who claims not to believe in evolution, that person is ignorant, insane, or wicked.” Johnson described that sentiment as the “zeal of Darwinists to evangelize the world by insisting that even non-scientists accept the truth of their theory as a matter of moral obligation.” Johnson perceived that the basic problem with the argument for Darwinism was that it relied on the assumption of blind and purposeless origins of the universe, rather than on scientific evidence.

So he set out to spotlight the problems with that logic in his seminal book, Darwin on Trial (1991). Critics harshly panned the book, but it helped launch the intelligent design movement in academics. Casey Luskin explains, “The idea of intelligent design became a magnet for scholars from a variety of fields: biology, chemistry, physics, philosophy, theology, law. All of whom saw Darwinism’s fatal reliance on naturalistic thinking.” Notable proponents of intelligent design include Luskin (geology, law), Michael Behe (biochemistry), William Dembski (mathematics), Ann Gauger (zoology), and Stephen Meyer (geophysics, philosophy).

John Lennox, mathematics professor at Oxford, summarizes their cause. “The more we get to know about our universe, the more the hypothesis that there is a Creator gains in credibility as the best explanation of why we are here.” Whatever we come to know about our universe, some humbling questions from the Creator will always remain. “Where were you when I laid the foundation of the earth? Who has given understanding to the mind?” (Job 38:4, 36).

Phillip Johnson passed away in November 2019. His legacy is not just his own work, but that he helped spark a movement to answer questions about the origins of our complex universe. And to think, it happened because someone invited a little girl to VBS. What a simple thing.

Place in Time
Scroll to top