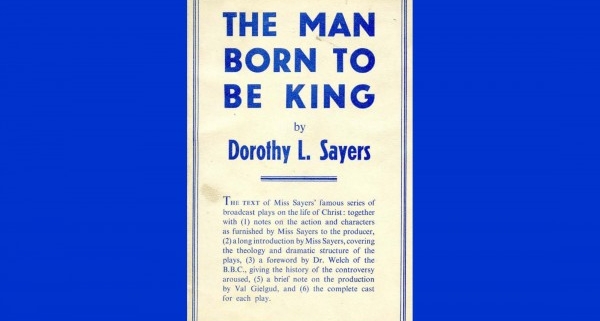 Dorothy Sayers used her Oxford education in languages and literature to disrupt religion in the United Kingdom during WWII. When the dust settled, Jesus emerged as more human and more accessible to a threatened people in search of hope.

J. W. Welch with the BBC commissioned Sayer, in her 40’s at the time, to write a series of plays on the life of Christ, originally intended for children. She agreed to the project if she could write the dialog in modern language.

After a press conference in preparation for the first broadcast of “The Man Born to be King,” the storm broke out. Fake news reports called the effort blasphemous and vulgar. Protests began. The House of Commons investigated. The BBC’s Religious Advisory Committee convened. Welsh later wrote, “This was, for me, an unforgettable meeting, and ought to go down in the annals of Christian cooperation.” The plays were broadcast.

Her great “crime” was to expand the account of Jesus’ life using modern dialogue. Here is a sample from Luke 24, a post-resurrection appearance.
JESUS: What are you afraid of?
JOHN: Oh, my dear! Forgive us for being so stupid! Is it really you?
JESUS: Feel me and see. Take my hand.
JOHN: Your hands are warm and strong, and wounded.
JESUS: I should like something to eat. What have you in the house?
MATTHEW: Why, this is like old times!

After the broadcasts, the BBC received grateful notes such as, “People don’t want Christ as somebody in a book, gentle, kind, and charming as Cinderella, but a real person who can give them strength and courage to love God.” Perhaps a modern version of this idea is the 2002 film “Joshua,” which portrays Jesus stepping into an American small town. When His humanity is evident, Jesus is more approachable and the human response is more spontaneous.

Jesus made himself accessible to people despite His fatigue and hunger. He grieved over the death of His friend Lazarus. He rejoiced with His friends when they returned from their first mission trip. He interrupted His travels to heal a blind man, help a sick woman, and touch a leper. He brought wine to a wedding. He brought food to a preaching event. He turned Zaccheus’ house into an Airbnb. He enjoyed the company of people who had yet to embrace His true identity as God the Son. God made himself accessible as a human walking on this earth, and we continue His presence as we function as the visible body of Christ.

Without realizing it, you can relegate Jesus to a character in a dusty book, or shade him with static stained glass. You come to know a person as you interact with him or her, and with mutual friends. Same with Jesus. He is real and accessible, and no one loves you more.

The Search
Scroll to top