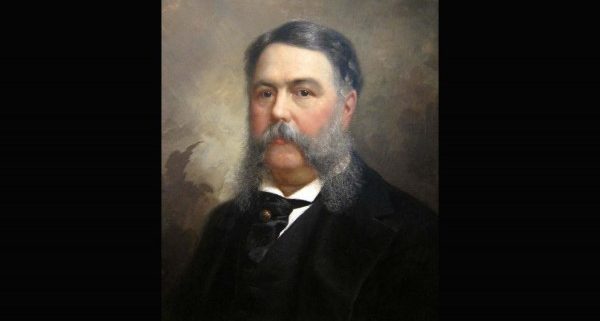 A wealthy New Yorker becomes President, much to the surprise of his fellow Republicans.  Many in the country express grief and fear.  But none know his limitations more than himself.  Ascending to the Presidency was his great adversity.

In his book, “The Man the Presidency Changed,” Scott Greenberger documents the unlikely ascension of Chester Arthur.  Despite being known as corrupt and deeply flawed, his party nominated Arthur as Vice President on the ticket with James Garfield in 1880.    They won, but when Garfield was assassinated the next year, Arthur realized that his future presidency could not be like his past.

Julia Sand acted on the great angst that gripped the nation.  She began to write letters to Arthur, including these lines: “Great emergencies awaken generous traits which have lain dormant half a life.  If there is a spark of true nobility in you, now is the occasion to let it shine…Reform!”  He did.  His work as an anti-corruption reformer and civil rights advocate earned many adversaries and cost him a second term.  The presidency transformed him and for that he said, “My debt is to the Almighty.”

You and I won’t face the adversity that comes with high office, but we have our own.  How do we respond, and how does it affect us?  If ever a man could speak to adversity, the Biblical Job can.  You know the story, how he endured the loss of everything.

Adversity didn’t come his way because God was punishing him.  In fact, he “was blameless, upright, fearing God and turning away from evil” (1:1).  Sure, you can create your own adversity that pushes you to repentance.  But when this fallen world just picks on you, God can still use it for good.  Wait for it.

Job did not let his troubles cause him to doubt God.  He went so far as to say, “Though He slay me, I will hope in Him” (Job 13:15).  When you know God is good and He loves you, you can trust that the adversity in your life is not meaningless.  “Consider it all joy, my brethren, when you encounter various trials, knowing that the testing of your faith produces endurance” (Jas. 1:2).

Job protested a little much, so eventually the Lord responded by rolling out his extensive resume as Creator (ch. 40, 41).  Suddenly self-conscious, Job could only stammer, “I know that you can do all things, and that no purpose of Yours can be thwarted” (42:2).  Can you accept that God works purposefully in your life through blessing and adversity?

I heard Mike Ducker, CEO of FedEx Freight, tell his story.  Some of his family members were murdered by another family member.  His tragedy drove him toward God and taught him a deeper faith.  He concluded, “Adversity is an opportunity to reflect Christ.”  Ponder that.

Work as Worship
Scroll to top