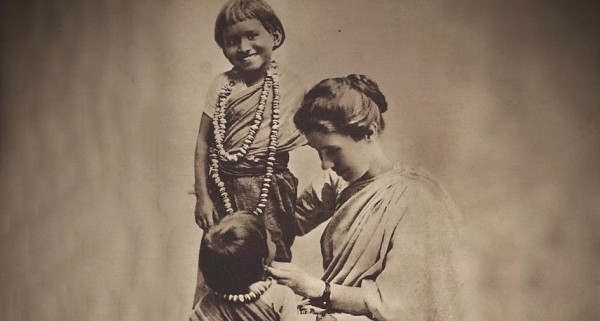 She never married.  She never bore a child.  Yet she was a mother to over a thousand children.  Amy Carmichael (1867-1951) is remembered for her work in India rescuing orphans in the name of Jesus.

Following Jesus’ example of a sacrificial life was the outcome of early spiritual formations in her life.  As a teenager, walking home from church meeting one Sunday, she saw an old woman with a heavy burden hobbling along.  Carmichael and her brothers carried the load and helped the woman.  In that moment, she recalled a verse that focused her life on things that matter.  “No man can lay a foundation other than the one which is laid, which is Jesus Christ. Now if any man builds on the foundation with gold, silver, precious stones, wood, hay, straw, each man’s work will become evident” (1 Cor. 3:11-12).

Isolating that verse could cause you to wonder if you could ever do enough. As Carmichael struggled to live a holy life, another verse brought her great joy and relief.  It describes Jesus as the One “who is able to keep you from stumbling, and to make you stand in the presence of His glory blameless with great joy” (Jude 1:24).  Her life of service became her joyful response to being made blameless before God by faith.

She moved to India at the age of 27.  A formative moment happened a few years later.  Seven-year-old Preena came asking for protection.  She had fled a temple where she had been sold for prostitution.  Carmichael took her in and began to learn about the similar plight of many other young girls and boys.  In 1901 she founded the Dohnavur Fellowship to provide a safe home for orphans.  But it was not an institution.  It was the children’s loving family.  They called her “Amma,” which means mother.   Dohnavur continues to this day.

Carmichael wrote a confession which includes these lines.  “My Joy: To do Thy will, O God.  My Prayer: Conform my will to Thine.  My Motto: Love to live – live to love.”  Her life was a living confession, as she served in India continuously for 55 years without ever returning to her home in Ireland.  When she died, to honor her memory her children placed on her grave a birdbath. On it they inscribed simply, “Amma.”

Not Forsaking
Scroll to top