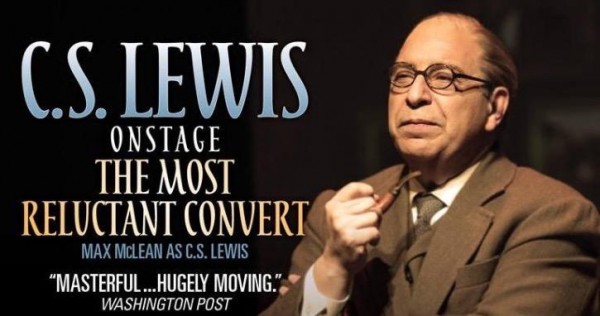 Last month in Atlanta, the Fellowship of the Performing Arts presented “The Most Reluctant Convert,” a retelling of the story of C.S. Lewis’ journey to faith in Christ.  The 80 minute, one-act play featured Max McLean, the founder and artistic director of the new York City-based troupe.

McLean’s own reluctant journey includes a girl who took him to a Bible study.  “I had not been confronted by the power and insight of the Bible prior to that.  At first I wanted to run away, but I couldn’t.  Then I read John’s Gospel – in one sitting. I thought Jesus was going to come right out of the pages of the Bible and take me with him.  I knew this story was true and that my life would never be the same again.”  He later founded FPA as a means to express faith through the dramatic arts.  And yes, he married the girl, Sharon.

Art in its many forms is intended to allow us to experience life from another’s perspective.  Sometimes it conveys truth through language, such as in a play or literature.  Other times the truth can be more subtle, such as in painting or music.  Good art is compelling because it tells the truth about God, human beings, and nature.

The original Artist is the One who painted truth into creation.  “Since the creation of the world His invisible attributes, His eternal power and divine nature, have been clearly seen, being understood through what has been made…” (Rom. 1:20).  Is that not why we marvel at the beauty of nature, which is evidence of the mind of God?  Humans alone in creation admire and create beauty, because we alone are made in His image and yearn for the Divine.

Lewis’ artistry in “The Magician’s Nephew” has Digory and Polly arriving to an empty, dreary place.  “But then in the chaos, a Voice began to sing in the most sonorous tones imaginable. All at once the blackness overhead was ablaze with stars. The sun was born, laughing for joy as it arose! In the fresh light of the young sun stood the Lion Aslan — huge, shaggy, and bright as it was singing the new world into being. As his song continued, the valley grew green, trees were born, flowers blossomed, and then, as a stretch of grassy land was bubbling up, out came the animals great and small.”   Aslan said, “I give you the woods, the fruits, the rivers. I give you the stars and I give you myself.”

Lewis’ thoughts on art and beauty may well be summed in his words, “If I find in myself a desire which no experience in this world can satisfy, the most probable explanation is that I was made for another world.”  Thanks Mr. McLean for the reminder that indeed, we are.