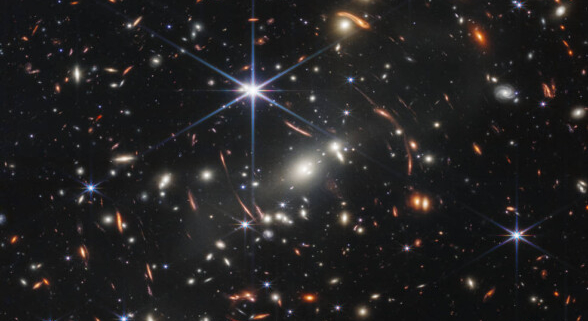 Scientists recently launched the James Webb Space Telescope (JWST). Humans can now see deep space like never before. The images are at once beautiful, mysterious, and comforting.

The JWST orbits the sun, unobstructed by earth’s atmosphere. The infrared telescope is 21 feet wide and is protected by a tennis court-sized sunshield. “If you held a grain of sand on the tip of your finger at arm’s length,” Bill Nelson of NASA said about one image, “that is the part of the universe you are seeing.”

The JWST will confirm what scientists have known since the 1920s. The universe is expanding, which means it had a beginning. Before that discovery, scientists believed the universe was eternal. “Then there was no need to explain,” Simon Singh writes, “how it was created, when it was created, why it was created, or Who created it. Scientists were particularly proud that they had developed a theory of the universe that no longer relied on invoking God.” But it didn’t hold. It was a futile quest that continues today.

I appreciate the talents of the JWST scientists and engineers. When I see the images, I’m awestruck. God spoke those stars and galaxies into existence in the vast reaches of space. “The worlds were prepared by the word of God, so that which is seen was not made out of things which are visible” (Heb. 11:3). That puts humanity into perspective.

In “The Brook,” Tennyson reminds us how finite we are. “I murmur under moon and stars in brambly wildernesses. I linger by my shingly bars, I loiter round my cresses. And out again I curve and flow to join the brimming river. For men may come and men may go, but I go on forever.” It’s amazing how nature and the night sky bring ultimate questions to mind. “When I consider Your heavens, the work of Your fingers, the moon and the stars, which You have ordained; What is man that You take thought of him?” (Psa. 8:3-4).

Within this vast universe, God fine-tuned earth to sustain life. He revealed Himself as Jesus, God the Son, by whom “all things were created in the heavens and on earth” (Col. 2:16). He coded your DNA so you can have a mind to know Him and a conscience to mind Him. In time, He “became flesh and dwelt among us” (John 1:14). Not content to leave you separated from Him by sin, He suffered death “in order to present you before Him holy and blameless and beyond reproach” (Col. 1:22). The invitation is, “whoever believes in Him shall not perish, but have eternal life” (Jn. 3:16). By faith, you are reconciled to the Eternal God.

The JWST images reveal the handiwork of the Creator who loves you enough to be your Savior. He is an awesome God!