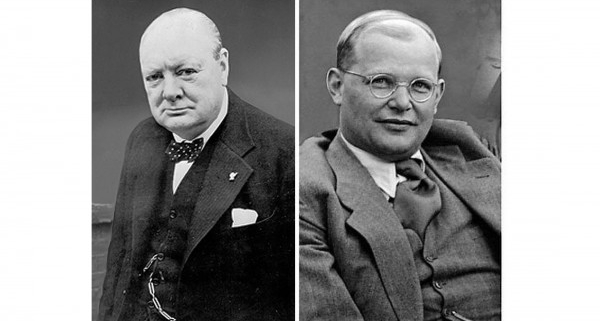 The WWII era was a frightening time as people realized that life as they knew it could actually end. Two leaders from that period noted the link between beginning and ending, expressing hope even in those dark days.

The British army had finally turned back Rommel’s tanks in North Africa. In a speech in November 1942, Winston Churchill tempered his nation’s thrill over the victory. “Now this is not the end. It is not even the beginning of the end. But it is, perhaps, the end of the beginning.” The beginning had been quite bleak with the embarrassing defeat at Dunkirk. Some had even called for terms that would have resulted in the liquidation of the British Empire. Yet Churchill saw reason for hope. He continued, “Here we are, and here we stand, a veritable rock of salvation in this drifting world.” A few years later, this hope would be realized as a new beginning for post-war Europe.

As the shooting war was ending, Pastor Dietrich Bonhoeffer was imprisoned for resisting Hitler and Nazi brutalities. He was in the Buchenwald concentration camp, and later Flossenburg. In April 1945, at the end of a Sunday service, the guards came for him. His fellow prisoners knew what this meant. He said, “This is the end…but for me it is the beginning.”

This history reminds you that what looks like an ending might well be a beginning. A childhood completed is an adult life begun. A long goodbye at the airport begins the journey of a lifetime. The loss of health begins a certain thoughtfulness about the gift of life. A career completed means time for new pursuits. A friendship turned toxic begins a season of forgiveness. The passing of the faithful means “to be at home with the Lord” (1 Cor. 5:8).

You are not abandoned to the chaos of meaningless endings. Jesus owns beginnings and endings! He said, “I am the Alpha and the Omega, the beginning and the end” (Rev. 21:6). He is there in the world’s beginning (John 1:1). He is there in the end, promising, “I am with you always, even to the end of the age” (Matt. 28:20). He will be there when you take up residence in the Father’s house (John 14:2). You can trust him to renew you through your beginnings and endings.

The Christian life is an ending and a beginning. If you are in Christ, you are “a new creature; the old things passed away; behold, new things have come” (2 Cor. 5:17). Reconciled to God through Christ, you begin a life of peace with Him. If God can love you so, then He can take whatever rough ending you endure and buff it into a beginning.

Why Me?
Scroll to top