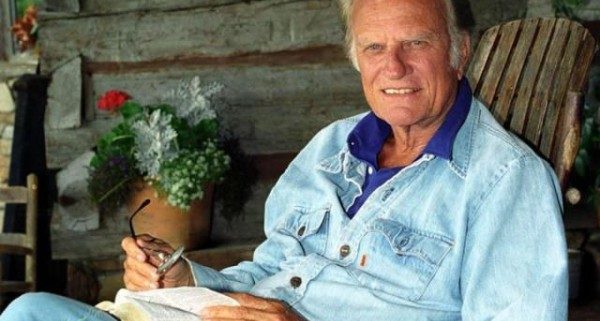 I never met him, but he was dear to me. I grieve his passing.

Billy Graham held the respect of the world’s powerful people, yet he thought of himself as a simple farm boy called by God. If ever I was tempted to doubt the authority of the Bible, the identity and work of Christ, or the reality of eternal life, I knew that a man of such stature believed. He is now part of that “great cloud of witnesses” (Heb. 12:1).

I’ll miss those stadiums filled with people from all walks of life. Before the civil rights movement of the 1960’s, he made sure race was no barrier to participation in his events.

Someone would offer a testimony of faith. One was Louis Zamperini, the Olympian and WWII POW who was saved at the Los Angeles Revival in 1949. He returned to Japan and led some of his captors to Christ, and later founded a ministry to wayward boys.

I’ll miss Billy Graham’s prophetic voice declaring, “The Bible says…” He never failed to mention the historical event that authenticated his message, the cross of Christ. Rev. Graham explained once that he doesn’t transition his message to an ending invitation. He is giving the invitation from the start.

You would hear something like this: “God loves you! Christ shed his blood on the cross for you. ‘Whosoever shall call upon the name of the Lord shall be saved’ (Rom. 10:13), the Bible says. Repent from sin! You won’t be the same once you come to Christ. Come by faith to receive Jesus as your Savior and Master. Make your faith public right now. Your bus will wait.”

Cliff Barrows (d. 2016) would lead the choir singing, “Just as I am, without one plea, but that Thy blood was shed for me, and that Thou bidd’st me come to Thee.” The aisles of the vast stadium would flow like waterfalls with people willing to identify with Christ. Millions stepped into that aisle to begin their walk with Jesus.

The world is a better place because of Rev. Graham, but his only boast is in the cross of our Lord Jesus Christ (Gal. 6:14). We grieve, but not “as do the rest who have no hope” (1 Thes. 4:13). He closed his autobiography talking about heaven. “I look forward to seeing Christ and bowing before Him in praise and gratitude for all He has done for us, and for using me on this earth by His grace – just as I am.” Goodbye, Billy Graham. We will see you soon.