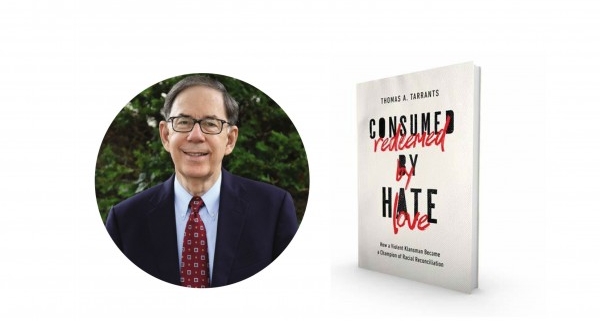 In a city near you, people have been using both peaceful and violent means to accelerate change.  The daily news compels you to form an opinion on the methods or the goal of that change.  Some plead for America to honor its original declaration that “all men are created equal.”  Others want balanced scales of justice.  Some want a new president or a new law.  Others want to redistribute wealth or property.  Some want reconciliation while others want reparations.  The reason for so many solutions is that we don’t agree on the problem.

Our most basic problem is a matter of the heart, and what we desire above all else.  Jesus said “Seek first His kingdom and His righteousness” (Matt. 6:33).  When you seek God’s rule over your heart, you’ll find that you also “love your neighbor as yourself” (Matt. 22:39).  Jesus loved and associated with people not like him, and they were changed.

Tom Tarrants tells the story of a heart change in his biography, Consumed by Hate, Redeemed by Love.  The subtitle is, “How a Violent Klansman Became a Champion of Racial Reconciliation.”  Tarrants honestly believed he was a Christian because of his early church experience in the South.  In high school in the 1960’s he became radicalized, believing his terroristic actions were necessary for God and country.

In 1968, law enforcement shot him several times as he attempted to set a bomb.  At the age of 21, he received a 35-year sentence for his crimes.  He escaped but was recaptured. He attempted suicide but failed.  So he began to read.  History and philosophy began his intellectual liberation.  His spiritual liberation came when he read, “What will it profit a man if he gains the whole world and forfeits his soul?” (Matt. 16:26).

He realized that he needed repentance, forgiveness, faith, and change.  In 1970, kneeling on the concrete cell floor he prayed, “Lord Jesus Christ, I have ruined my life and the lives of others and committed many sins.  Please forgive me, take over my life, and do whatever you want with me.”  He writes, “In that moment I felt as if a thousand pounds had been lifted off my shoulders.  Something deep within me had changed – new life had invaded my heart.  Jesus had heard my prayer and I was now somehow different than I had been.”

True Christianity brings change.  The last fifty years are evidence of Tarrants’ changed life.  He reconciled with people he had hated and hurt.  After prison, he became a minister, reconciling people to God and to one another.

It’s not just that America needs change; Americans do.  Jesus’ call to love your neighbor is a timeless reminder that change begins with the heart.  Are you ready for that change?

The Love Motivation
Scroll to top