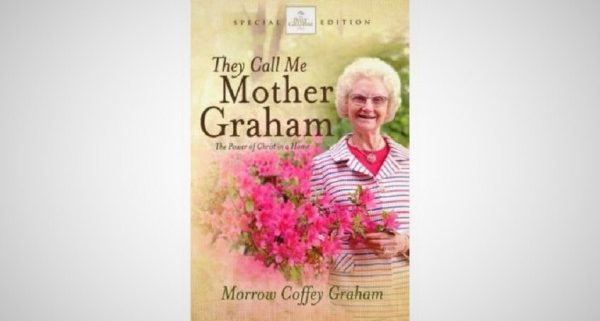 A mother’s love can transcend what she can express or demonstrate. We do well to appreciate her yearning for what’s best for her child. In the case of one mother, her deepest desire was for her son to trust Jesus. From her autobiography “They Call Me Mother Graham” (1977), here are the words of Morrow Coffey Graham about the son she called Billy Frank.

The year 1934 stands out significantly for our family. It was to prove to be particularly meaningful for Billy Frank. The complacent churchgoers of Charlotte needed a fire kindled in their hearts. Who better could do this than the well-known, fiery Southern evangelist Mordecai Ham? The men, including my husband, met together in one of our pastures to pray. While the men met, I had an all-day prayer meeting and Bible study in our home.

The invitation went out to the evangelist. Before long these same businessmen were erecting a large tabernacle of raw pine. For eleven weeks, beginning in September 1934, the meetings were each night.

Billy was now sixteen and just beginning his senior year in high school. Two of the first verses I ever had Billy commit to memory were, “Trust in the Lord with all thine heart; and lean not unto thine own understanding. In all thy ways acknowledge him, and he shall direct thy paths” (Prov. 3:5-6, KJV). Now those verses were to become meaningful in his young heart.

Vernon Patterson, one of the men who led the meeting in our pasture, had prayed very pointedly that “out of Charlotte the Lord would raise up someone to preach the gospel to the ends of the earth.” God answered that prayer and chose to do so by putting Billy under conviction and sending him forward to walk that sawdust aisle and trust in the Lord with all his heart.

Billy actually went to the meeting out of some curiosity. But God was working out His plan for Billy Frank’s life. Yes, I saw him go forward, and my mother heart was beating very fast. I was just rejoicing. I felt it was a wonderful thing to do, but my emotional experience was yet to come.

When we arrived home that night from the meeting, Billy was already home. When I came in he threw his arms around me and said, “Mother, I’m a changed boy!”

I wept tears of joy into my pillow that night. Billy’s words were to prove true. One of the verses that Billy had learned was, “For God so loved the world, that he gave his only begotten Son, that whosoever believeth in him should not perish, but have everlasting life” (John 3:16, KJV). Whether or not Billy as a sixteen-year-old fully understood all the implications of that, I do not know, but I do know that he was, as he so graphically described it, “a changed boy.”