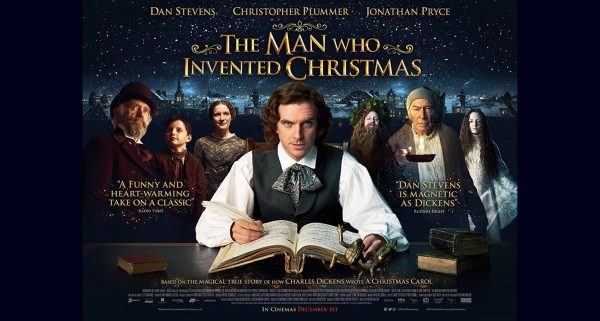 Actors Dan Stevens and Christopher Plummer weave a quite a tale about Charles Dickens’ writing of his classic “A Christmas Carol.”  The new movie is called, “The Man Who Invented Christmas.”  Great actors, and I’m thinking this ought to be good.  The reviews are generally positive, but that name is a bit (probably intentionally) provocative.

Last year, Time Magazine published research on the world of Dickens in 1843.  Dickens began writing this story as a commentary on the sad state of the poor.  The emerging industrial economy dehumanized the working class, and exploited child labor with long hours in sickening environments.  He sought nothing less than societal change.  He believed the work houses that destroyed poor families were a scourge, and that business owners should take responsibility for their workers’ well-being.  Hence Scrooge’s grand change of heart.

“A Christmas Carol” is about family, love, and hope.  It also shows human failings, poverty’s misery, and lost opportunity.  Dickens weaves these together around the theme of Christmas and via the supernatural, the human heart is redeemed.  The story still resonates, but Dickens did not invent the “good news of great joy which will be for all the people” (Luke 2:10).

In the last 2000 years, mankind has invented many Christmas traditions, such as special services, gift giving, and holiday songs.  But those, including “A Christmas Carol,” are only the trappings.  The first Christmas was part of God’s “eternal purpose which He carried out in Christ Jesus” (Eph. 3:1).  The angels explained it to Mary and Joseph and proclaimed it to the night time shepherds.  The star lighted the way for the gift-bearing, eastern Magi.

Bethlehem was neither the first nor the last episode in the story.  Jesus didn’t begin as, nor remain the Babe in the manger.  His purpose was to implement the eternal plan.  He separated from his heavenly home to take on the weakness of humanity and to suffer at the hand of those he loved.  He bore all of our sins so that he could offer the greatest gift of all, eternal life.  He did all that “for the joy set before Him” (Heb. 12:2).  Joy to the world, indeed!

A Hebrew prophet 700 years before the Nativity wrote, “My servant, will justify the many, as He will bear their iniquities” (Isa. 53:11).  That servant was the child born unto us called Mighty God (Isa. 9:6).  Because of the cradle there would be a cross; because of the cross there is hope.  Christmas morning was the dawn of hope, brought to you by the Eternal Father who loves you.

This was the plan all along, “invented” by God.  So, yeah, enjoy what sounds like a good movie, but don’t let the title fool you.  Dickens was a gifted writer, but Christmas was invented far before he came along.  Isn’t that Merry?