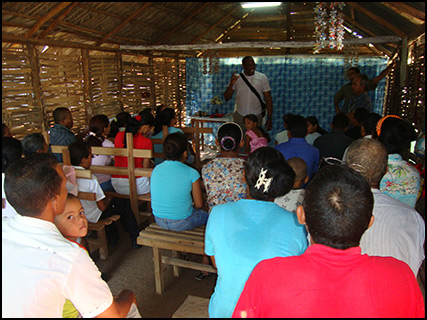 Speaking to Christianity Today, after his escape from Cuba in 2012, Pastor Carlos Lamelas described a life of constant surveillance, attempts at black market entrapment, assaults and beatings, false accusations and imprisonment. Yet world leaders memorialize Fidel Castro as a successful socialist rather than a tyrant.  He may be dead, but his intolerance of religious freedom in Cuba lives.

America’s founders envisioned a government that answered to the people, who answer to God.  Castro wanted the people to answer to him only.  He founded an atheistic state, typical of 20th century communism.  What it purports to offer comes at the price of freedom, a point today’s socialists might consider.

After the fall of the USSR, Cuba ended its official policy of atheism. Churches grew as people looked for answers and found Christ.  Since new church buildings are not permitted, a government official suggested home meetings.  Castro accepted overtures from the Catholic Church.  But the detente turned in 2015, with agents citing a new law to justify repression of churches.

Between 2014 and 2015, the number of religious freedom violations increased tenfold to 2300 cases according to Christian Solidarity Worldwide. In the first half of 2016, authorities targeted 1600 churches including demolition and confiscation of property, and imprisonment of church leaders.  Cuba still monitors and controls most aspects of religious life. “Serious religious freedom violations continue in Cuba, despite improvements for government-approved religious groups,” according to the U.S. Commission on Religious Freedom (2015).

Despite the oppression, the church in Cuba is growing rapidly. Christians still meet in homes and historic church buildings.  When a church outgrows a home, it multiplies to other homes.  CBN reports that in the last 20 years, Cubans started more than 16,000 churches.  The Baptists helped reinvigorate a failing seminary, which in 2008 graduated 150 pastors from an enrollment of 650.  The boot-heel of government does not easily stamp out faith, love, and hope.

The church in Cuba, Iran, and China have something in common: Persecution and sustained growth.  History indicates that these go hand-in-hand.  Jesus wanted his followers to be prepared for this.  “If they persecuted Me, they will also persecute you” (Jn. 15:20).  Peter wrote, “Do not be surprised at the fiery ordeal among you, which comes upon you for your testing” (1 Pet. 4:12).

With travel restrictions lifted, American Christians are moving quickly to support our Cuban family. Franklin Graham has issued a call to purchase Bibles for distribution in Cuba.  We can learn from those who “have been distressed by various trials so that the proof of your faith…may be found to result in praise, glory, and honor at the revelation of Jesus Christ” (1 Pet. 1:6,7). Now that he has met his Maker, perhaps Castro has learned something too, that his tyranny of the church has failed.