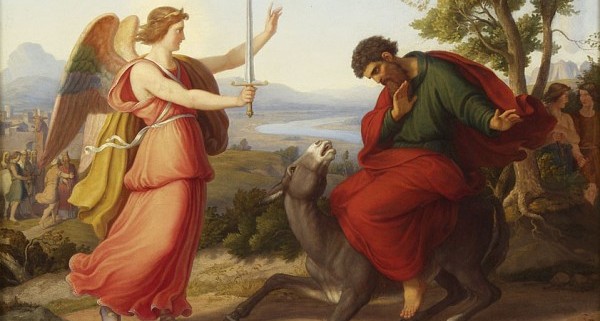 Andy Stanley, the well-known Atlanta preacher, recently stirred up controversy over some comparisons he made between large and small churches.  After being called out for it, he offered a sincere and refreshing apology, even calling what he said “absurd.”  Wow, a modern case for the wisdom of Balaam’s donkey!

Let me refresh your memory of the story, a humorous one if not so serious. There once was a prophet named Balaam.  He lived in the days when Moses was leading God’s people toward the Promised Land.  As they approached Moab, its ruler sent his messengers to get Balaam.  He wanted to pay Balaam to curse God’s people so he could drive them away.

So after a talk with God who told him not to curse the people, Balaam got on his donkey and headed out to meet this ruler. But apparently God knew Balaam was thinking about the fees he might collect for the curse, so He sent his angel to block his way.  It was the donkey who saw the angel with sword in hand, and turned off the path.  Balaam beat her back to the path.  Seeing the angel again, she veered away and mashed his foot into a wall, earning more blows.  Still seeing the angel, the jenny finally just lay down, despite his strikes.  At this point the donkey demanded an explanation, and even more curious Balaam talked back to her!  Then he saw the angel, and had an opportunity to change his words and actions, thanks to the wisdom of his donkey! (See Num. 22.)

It is not just preachers and prophets that can benefit from a change of course. Probably the most overly used, rote prayer phrase I have heard is for God to “lead, guide, and direct,” certainly a noble hope.  But what does that look like?  If God answers that prayer with a mashed foot or a conversation with an ignorant beast, might that be better than stumbling into an angel with a drawn sword?  If we are held accountable for something stupid we said or did, is it not better to set it right than to double down?  “The way of a fool is right in his own eyes, but a wise man is he who listens to counsel” (Prov. 12:15).

When we find ourselves heading down the wrong path, if we are fortunate something or someone will reveal our folly, and perhaps we’ll have the good sense to change course. Thanks Rev. Stanley for demonstrating some humility here, and let us know if you had a talk with a donkey along the way.