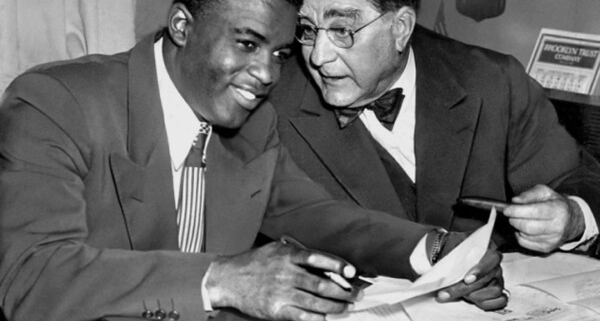 The 2022 MLB season is delayed by an owner-initiated lockout that ended after 99 days. After two years of pandemic, baseball fans just want it to be about the game. When players started anthem-kneeling in 2017 and Commissioner Manfred moved the All-Star game in 2021, fans longed for simpler times.

Those simpler times exist only in your memories of little league or neighborhood sand lot action. Even in 1945, times were not simple. That’s when an honorably discharged U.S. Army veteran signed to play for Branch Rickey, manager of the Brooklyn Dodgers. Rickey was an innovator. He introduced the batting helmet, pitching machines, and the farm system. He also introduced the world to his new recruit Jackie Robinson.

Rickey and Robinson’s meeting at Dodgers headquarters had the makings of a historic moment, not just for baseball. Robinson would be the first black player in the league. “I know you’re a good ballplayer,” Rickey said. “What I don’t know is whether you have the guts.” Rickey wasn’t talking about Robinson staring down heaters in the big leagues, but facing the threats to his life and attacks on his dignity. “I’m looking for a ballplayer,” Rickey said, “with guts enough not to fight back.”

Knowing it would not be easy or simple, Rickey shared with Robinson the words of Jesus. “I say to you, do not resist an evil person; but whoever slaps you on your right cheek, turn the other to him also” (Matt. 5:38). By this Jesus put personal retribution and revenge out of bounds. Jesus knew about emotional intelligence, self-awareness, and self-management before Daniel Goleman popularized the terms. It matters because to lose control is to lose sight of your mission. When we who share the life of Christ are wronged, that becomes our opportunity to sacrifice our egos, serve others, and love our neighbor.

Robinson accepted the charge from fellow Christian Rickey and history celebrates the story. Eric Metaxas writes about Robinson, “With God’s help, one man lifted up a whole people and pulled a whole nation into the future.” All because a man of faith simply applied the words of Jesus to turn the other cheek.

Faithful in Prayer
Scroll to top