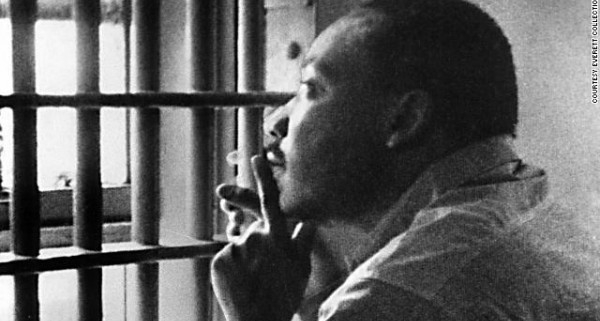 Martin Luther King, Jr. was an Atlanta pastor who spent time in an Alabama jail. When his fellow clergymen described his cause “extreme” and called for an end to it, he responded with his now-famous Letter from Birmingham City Jail.

King wrote, “You speak of our activity in Birmingham as extreme. As I continued to think about the matter, I gradually gained a measure of satisfaction from the label. Was not Jesus an extremist for love: ‘Love your enemies, bless them that curse you.’ Was not Paul an extremist for the Christian gospel: ‘I bear in my body the marks of the Lord Jesus.’ Was not Martin Luther an extremist: ‘Here I stand; I cannot do otherwise, so help me God.’ And John Bunyan: ‘I will stay in jail to the end of my days before I make a butchery of my conscience.’ And Thomas Jefferson: ‘We hold these truths to be self-evidence, that all men are created equal.’ So, the question is not whether we will be extremists, but what kind of extremists we will be. Will we be extremists for hate or for love?”

I can think of a few other extreme things Jesus said to whoever might be listening. “Whoever wishes to become great among you shall be your servant” (Matt. 20:26). “Whoever loses his life for my sake and the gospel’s will save it” (Mark 8:35). “Whoever does not carry his own cross and come after Me cannot be My disciple” (Luke 14:27). “Whoever does not receive the kingdom of God like a child will not enter it” (Luke 18:17). “Whoever believes in (God’s only Son) shall not perish, but have eternal life” (John 3:16).

Is it extreme to believe the virgin birth of Jesus actually happened? Philosopher Vince Vitale recently spoke about this. He mentioned Stephen Hawking’s atheistic explanation for our universe: “. . . the universe can and will create itself from nothing. Spontaneous creation is the reason there is something rather than nothing, why the universe exists, why we exist.” Vitale wonders, “Is that any less miraculous of a birth than the account from Luke Chapter 1? We live in a miraculous world. Regardless of whether you are a theist, an atheist, or an agnostic, there’s no getting around that fact. It’s not a matter of whether we believe in a virgin birth, it’s just a matter of which virgin birth we choose to accept.”

King and Vitale make the same point. We are all extremists of one stripe or another. The culture prefers the extremes of progressive secularism and naturalistic scientism, and concludes that faith is irrelevant. So, to believe and act on the Bible’s audacious truth claims is to earn the label “extremist.” But if that’s what it takes to know and follow Jesus, I accept. What kind of extremist are you?