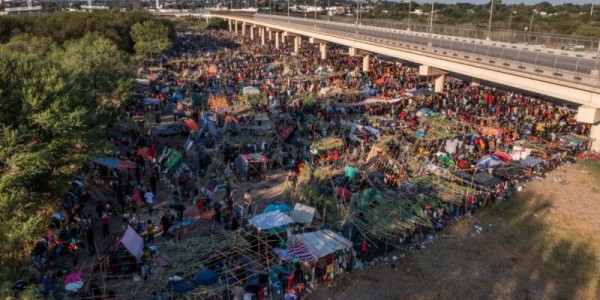 I followed with great interest the plight of 15,000 Haitian migrants camped under a bridge in Del Rio, Texas. Living in their country for two years, I saw firsthand the wretched economic conditions and the desperation.

Illegal immigration is a political flashpoint, and I’ll not take sides here. I don’t have all the details, but the part of the story that troubles me is that some Haitians were put on planes back to Haiti while others were put on buses to U.S. cities. Those deported must have felt it wasn’t fair that the U.S. allowed the others to remain.

Years ago, a Haitian friend told me he had received a U.S. tourist visa. I challenged him. “Are you really just visiting or do you plan to overstay your visa and get a job?”  His answer was humbling. “Wouldn’t you do anything you could to offer your children a better life? As an American, I don’t think you could ever really understand.” That made me realize that human ideas of justice will never be perfect and we may never agree on what is fair.

The yearning for fairness and justice is hard-wired into our humanity. We yearn for wrong things to be set right. Yet even the justice of a holy God doesn’t come across as fair to us imperfect humans. Is it fair that we are born into the human condition and inevitably fall under God’s judgment?  Are the murderer of children and the teller of little white lies equally accountable to God? Is eternal punishment fair?

C. S. Lewis considers the objections to God’s justice and writes, “What are you asking God to do? To wipe out their past sins and, at all cost, to give them a fresh start? But He has done so, on Calvary.” So yes, we all commit crimes against God, and the impact of some are more horrendous to us than others. But the offer of forgiveness is the same. Jesus told of the vineyard owner who paid all workers the same though some worked less. He said, “Is your eye envious because I am generous?” (Matt. 20).

Here is God’s generous justice: “He Himself bore our sins in His body on the cross” (1 Pet. 2:24). Jesus’ death procured perfect justice for us but it was not fair to Him. He was innocent of our ugly sin even as he made the cross beautiful to us. He made it possible for you to be declared blameless.

Those who would travel to the U.S. border seeking illegal entry do not know how laws will be enforced when they arrive. To immigrants and U.S. citizens alike, that is not setting wrong things right. But this is: “Having been justified by faith, we have peace with God through our Lord Jesus Christ” (Rom. 5:1).

Waves and Winds
Scroll to top