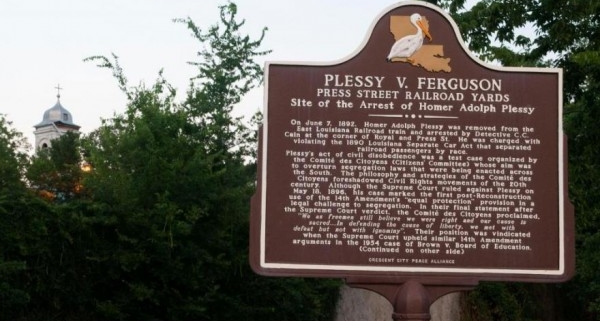 Louisiana Gov. John Bel Edwards recently pardoned Homer Plessy. Plessy has been dead since 1925.  What’s this all about?

In the post-Civil War era, Plessy committed civil disobedience by violating a state law that required the separation of races in railroad cars. He appealed his case to the U.S. Supreme Court.  In the Plessy v. Ferguson (1896) decision, the Court created the “separate but equal” doctrine. The lone dissent was Justice Harlan who wrote, “Our Constitution is color-blind and neither knows nor tolerates classes among citizens.”

In the Brown v. Board of Education (1954) ruling, the Court began to fix its faulty reading of the U.S. Constitution. The Civil Rights Act (1964) further clarified constitutional freedoms. That history ultimately led to the descendants of Plessy and Harlan gathering with Gov. Edwards for a moment of repentance, forgiveness, and healing.

Another governor, George Wallace, stood in the way of freedom until an assassin’s bullet paralyzed him. In 1979, he wheeled his chair into Martin Luther King, Jr.’s former church in Montgomery and admitted his faults. He said to them, “I can understand something of the pain black people have come to endure. I know I contributed to that pain, and I can only ask your forgiveness.” They did. As MLK said years earlier, “Forgiveness does not mean ignoring what has been done…It means, rather, that the evil act no longer remains as a barrier to the relationship.”

It takes courage to admit fault; it takes sacrifice to grant forgiveness. Courage, because humility is hard.  Sacrifice, because you give up your right to retaliation.  Repentance and forgiveness are part and parcel of the Christian experience because they express love for God and for one another.

Jesus told a story about a man who owed a great debt to the king. To settle the debt, the king planned to sell the man and his family as slaves. The man pled for leniency. The king felt compassion and forgave the entire debt. But the man went straight out and used harsh tactics to collect a small debt someone owed him. The king summoned the man and said, “Should you not also have had mercy on your fellow slave, in the same way that I had mercy on you?” (Matt. 18:21ff).

“To be a Christian means to forgive the inexcusable,” wrote C.S. Lewis, “because God has forgiven the inexcusable in you.” When you grasp how much you have been forgiven, you will be a forgiver. The Bible says, “Be kind to one another, tender-hearted, forgiving each other, just as God in Christ also has forgiven you” (Eph. 4:32).

The U.S. Supreme Court has more work to do in fixing its faults from the past. But whether it does or not, you have your own work to do.  Be a forgiver, as you have been forgiven.

The Storied Life
Scroll to top