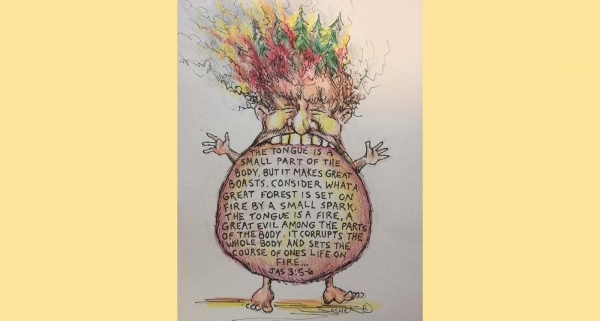 What happened in the congressional hearing this month with FBI agent Peter Strzok is a sad commentary on our times and culture.  A fire is out of control.

The hearing began to degenerate when one congressman told Strzok, “I don’t give a d— what you appreciate.”  But chaos ensued when another congressman described Strzok lying and cheating on his wife.  The room erupted into chaos with shouts of “insane asylum,” “shame,” and one yelling about taking medications.

Once politicians, comics, and protestors realized they could make headlines with shock value, it was only a matter of time before politeness became a quaint notion.  Southern belles don’t get the vapors over an affront to their sensibilities, gentlemen use crass language in front of women and children, and polite company is hard to find.  Our culture has coarsened considerably, and it’s a consuming fire.

It’s even in the church.  Mark Driscoll has been called the “cussing preacher.”  He lost his Mars Hill Church, but sadly not because of his potty mouth.  Pastor Ed Young countered his influence on young preachers.  “If we have to lower our communication to the level of scatological (think animal scat) humor, then we aren’t thinking through how to communicate.  We want to be very careful not to offend anyone with bad language.  The gospel is offensive enough without throwing in such words.”

Jesus was full of grace and truth, and did not use gratuitous and crass words for shock value.  But He did find occasion to call certain religious leaders hypocrites, sons of hell, blind guides, fools, whitewashed tombs, sons of murderers, and brood of vipers (Matt. 23), all candid descriptions of elitists supplanting God’s eternal truth (think Jesse Duplantis).

We’d do well to follow the “Three Gates of Gold,” Beth Day’s antebellum poem.  Is it true?  Is it needful?  Is it kind?  The Bible warns, “See how great a forest is set aflame by such a small fire!  And the tongue is a fire, and sets on fire the course of life, and is set on fire by hell” (Jas. 3:5-6).  It also urges, “Let no unwholesome word proceed from your mouth, but only such a word as is good for edification” (Eph. 4:29).  Jesus’ words are quite telling: “A good man out of the good treasure of his heart brings forth what is good…for his mouth speaks from that which fills his heart.” (Luke 6:45).

It is no virtue to speak whatever is on your mind. (“A fool uttereth all his mind” Prov. 29:11, KJV).  But when we do speak truth, even if it’s corrective or adversarial, the words of a follower of Christ Jesus are to reveal good treasure from a loving heart.  With the words you use and the thoughts you convey, you can be either a flamethrower or a fireman.