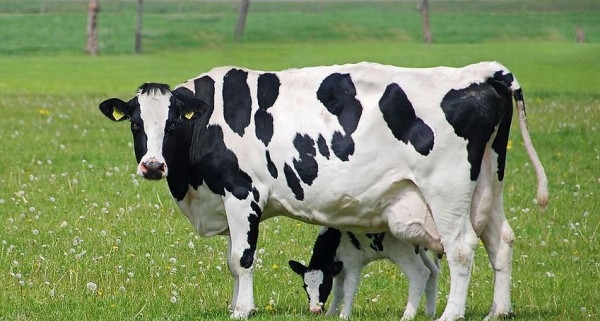 A dairy cow has a strong maternal instinct.  She objects to the standard practice of removing her days-old calf and challenges any barrier to it.  That natural instinct is the basis of a curious historical event.

The Philistines captured the Israelites’ holy symbol, the ark (think Indiana Jones, not Noah).  They began suffering plagues and suspected the ark’s presence.  To test this theory, they hitched milk cows to a cart and loaded the ark.  They took the calves away, and waited to see what would happen.  Overruling their natural instinct, “the cows took the straight way in the direction of (Israel). They went along the highway, lowing as they went” (1 Sam. 6:12).  The natural gave evidence to the supernatural.

For a modern example of the same, Watson and Crick discovered the 3D double helix structure of DNA in 1953.  DNA stores coded information which can be transmitted to make new cells. It also contains the instructions to make the de-coding machinery of RNA.  The DNA code is made up of four nucleotide bases, abbreviated as letters.  The human genetic code requires three billion letters.

How did that happen?  How did all that information become packed into tiny cells?  Such questions became disruptive to English philosopher Antony Flew.  For most of his life, he taught and wrote as an advocate of his atheist beliefs.  To his credit, he also believed in following the evidence.  At age 81, he did just that, and it was in part due to scientific discoveries about DNA.

He said, “DNA has shown, by the almost unbelievable complexity of the arrangements which are needed to produce (life), that intelligence must have been involved in getting these extraordinarily diverse elements to work together. It’s the enormous complexity of the number of elements and the enormous subtlety of the ways they work together. The meeting of these two parts at the right time by chance is simply minute. It is all a matter of the enormous complexity by which the results were achieved, which looked to me like the work of intelligence.”

In 2007, Flew published a book, There is a God: How the World’s Most Notorious Atheist Changed His Mind, describing how the natural gives unmistakable evidence of the supernatural.  I wish I could say he followed the historical evidence of Jesus and His Resurrection.  But the prior point remains, if God designed the universe you will see evidence of that.  If you are intellectually honest, you follow the evidence to Him.

“For by Him all things were created, both in the heavens and on earth, visible and invisible, whether thrones or dominions or rulers or authorities—all things have been created through Him and for Him. He is before all things, and in Him all things hold together” (Col. 1:16-17).