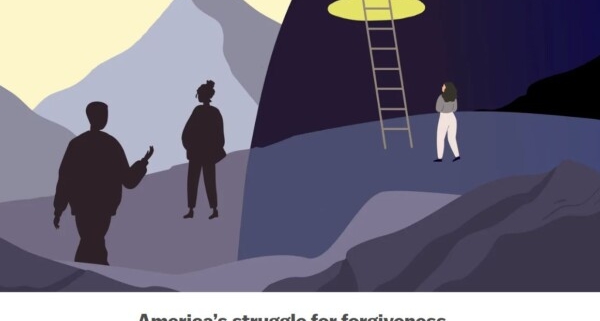 Vox.com published articles on “America’s struggle for forgiveness.” From what I read, Vox could learn something from regular Americans.

Vox writer Sean Illing offers a diagnosis. “A lot of people, with good reasons, point to social media and ‘cancel culture’ as evidence that we’re becoming a more punitive society. I do think that the internet has made us less forgiving, and I worry that the world we’ve built has supercharged our worst pathologies.” He hardly masks his bias that people of a certain policy or political bent have more pathologies to forgive than those who share his moral high ground.

Aja Romano maps out the hopeful stages of resolving toxic disagreements. “What we would hope to find after that initial period of outrage is discussion, apology, atonement, and forgiveness.” But that’s not happening per Atlantic writer Elizabeth Bruenig. “As a society we have absolutely no coherent story — none whatsoever — about how a person who’s done wrong can atone, make amends, and retain some continuity between their life/identity before and after the mistake.”

Isn’t it interesting that religious language finds its way into the discourse? These writers miss the point that theologians have known all along. Everybody needs forgiveness. None of us occupy the moral high ground and all of us share the worst pathology – the fallen human condition. And Jesus offers a coherent story about forgiveness and reconciliation.

It matters because forgiveness is a quality of life issue. It’s also a faith issue. Jesus draws a direct link between those who forgive and those who are forgiven. He wants you to offer others what He offers you. “If you forgive others for their transgressions,” He said, “your heavenly Father will also forgive you” (Matt. 6:14). When you understand the depth of your depravity and how much God forgives you, you become a forgiver. You leave the offender in God’s hands. It is liberating to release that pathological drive to control others and sustain outrage. Faith, love, and forgiveness make for a high-quality life.

Linda Bagley has that kind of life. In court, she had something to say to James McCleary. His impaired driving killed her son and daughter-in-law. She forgave him. Her daughter added, “Mr. McCleary, make your life right with God because that’s who we all answer to in the end.” Afterwards, Bagley gave McCleary a lengthy, tearful embrace. Her faith empowered her act of forgiveness and reconciliation.

C.S. Lewis supposed it’s easier to forgive the single great injury than the incessant provocations of daily life, “the bossy mother-in-law, the bullying husband, the nagging wife, the selfish daughter, the deceitful son – how do we do it? By remembering where we stand.” By faith in the Lord Jesus, you stand forgiven and reconciled to Him. That’s the reason to forgive, something Vox could learn from you.

A Blessed Day
Scroll to top