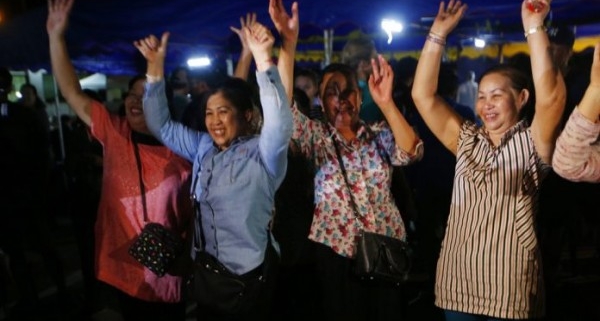 Every once in a while a non-political event grasps the world’s attention.  For two weeks, 12 boys and their coach were trapped in a flooded cave in Thailand.  Our prayers (hopes or thoughts if you prefer) were with them and those trying to extract them from subterranean danger.

The boys, ages 11 to 16, are the Moo Pa (Wild Boars) soccer team.  The older boy is a friend of a team member.  They bicycled to the cave in the Doi Nang Non Mountains as a team-building exercise.  After they entered, water began to rise, forcing them further into the six-mile deep cave.  Many can’t swim.

It took over a week for rescuers to locate the lost team almost two miles from the entrance.  While planning the rescue mission, parents sent a message via divers for the coach not to blame himself.  One Thai diver died when his oxygen was depleted, and received a hero’s memorial service.

Authorities feared the monsoon rains bearing down on the Indochina Peninsula would overwhelm the emergency pumps.  That, and the boys’ physical and emotional health added acute time pressure.  The plan was for two divers to escort each one to safety.

This was an intense event.  It involved helpless children, real danger, and maximum effort.  You try to imagine the pain of parents who could lose a child.  Instead, an entire nation erupts in celebration when the boys are extracted safely and returned to the land of the living.

Jesus explained that this natural human reaction is how God feels about finding you.  He told stories about a shepherd leaving 99 sheep to find the one, and a woman who finds a lost coin.  Both rejoiced with their friends.  Then He says, “In the same way there is joy in the presence of the angels of God over one sinner who repents” (Luke 15:10).

How is it that each one of us is lost, and needs finding and rescuing?  The Bible says that Jesus rescues us from “this present evil age” and “the wrath to come” (Gal. 1:4, 1 Thes. 1:10).  Our place of safety is clear.  “He rescued us from the domain of darkness, and transferred us to the kingdom of His beloved Son, in whom we have redemption, the forgiveness of sins” (Col. 1:13-14).  The land of the living, indeed!

Just as parents rejoice today in Thailand over their rescued boys, there is rejoicing in the presence of the angels over newcomers in the Kingdom of God.  You are safe in the arms of Jesus, by grace through faith, found and rescued.

Flamethrower or Fireman?
Scroll to top