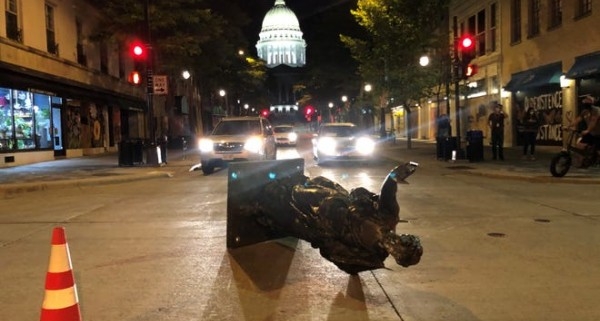 This is starting to look like a cultural revolution to some degree.  Be careful what you ask for, America.

Cultural values are expressed in its monuments to the past.  When time comes for change, what happens to those monuments is a declaration to the present.  Iraqis brought down Saddam Hussein in 2003. Ukrainians toppled Lenin in 2014.  I understand those.  But Columbus, Washington, Lee, Grant?  Even Francis Scott Key and Teddy Roosevelt can no longer stand.  This cleansing of the public square…maybe someone can translate the statement being made, if it’s a coherent statement at all.

It reminds me of something Jesus said.  After he healed a demon-possessed man who was blind and mute, he gave a talk.  He used what happened to that man to illustrate a point.  He explained that when an impure spirit comes out of a person it might well come back and find the house unoccupied.  “Then it goes and takes with it seven other spirits more wicked than itself, and they go in and live there.  And the final condition of that person is worse than the first” (Matt. 12:43-45).  His point was that just the removal of what is wrong is not enough.  It must be replaced with something right.  In this case, he was challenging his hearers to believe that he is the promised Messiah who offers the only hope of being right with God.

America’s founders led a revolution based on freedom, however imperfectly. But the trajectory they set became opportunity for all to gain freedom, including the right of assembly, protest, and speech.  Do those who seem to want a modern revolution realize that they are railing against the very culture that grants their freedom to speak against its flaws?  Will they open the doors to a final condition far worse than the first?

Os Guinness gives this much thought in his book, A Free People’s Suicide.  He writes, “In pulling down what are seen as the oppressive structures and practices of the old regime, successful revolutions inevitably create a vacuum into which can flow a hundred forces lethal to the ideals for which the revolution was fought.  The French, Russian and Chinese revolutions are cautionary examples of this truth.  Far from ordering freedom, they spiraled down to demonic disorder and tyranny, often far worse than any evil they replaced.”

I hope my fellow citizens consider carefully where we go from here.  Change may well be needed, but make sure change is for the better.  Heed the call of Jesus, “If the Son makes you free, you will be free indeed” (John 8:36).  Then call for cultural change in a way that uplifts all.  Your life, liberty, and pursuit of happiness are at stake.

Oh, and by the way.  Happy Birthday, America.  Enjoy your freedom.

Work of God
Scroll to top