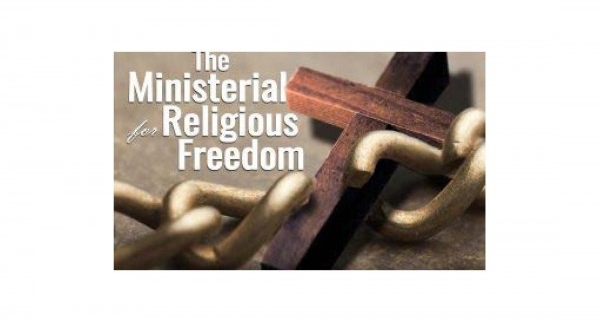 During the event, Sam Brownback, the U.S. Ambassador for Religious Freedom, announced the release of the Potomac Declaration.  This document notes that 80 percent of the world’s population endures limitations on the right to freedom of thought, conscience, and religion, and declares reasons to promote that right.

It is fitting that America lead such an effort since it’s in our DNA.  The Pilgrims were separatists, harassed by the Church of England, and came to these shores seeking religious freedom.  But more to the point, this freedom is under duress not just then, but now; not just in foreign lands but in America’s court rooms.

Speaking about a Supreme Court ruling, Samuel Rodriguez, president of the National Hispanic Christian Leadership Conference, called it a “defacto and legal catalyst for the marginalization of Americans who embrace a biblical worldview.  The moment Biblical truth stands defined as hate speech in our nation, America as we know her will cease to exist.”  That is serious.

In some quarters, sexual freedom trumps religious freedom.  Vince Vitale, Director of the Zacharias Institute, said, “Culture seeks from sex what is found in God: meaning, intimacy, identity, freedom.”  Our post-truth culture wants to be autonomous, liberated from God, and it confuses that for freedom.  Autonomy is an insidious form of captivity whose cellmates are chaos, confusion, and despair.  It is also a pretext to restrict religious freedom.

The 17th C. scientist Blaise Pascal said, “Men despise religion. They hate it and are afraid it may be true. The cure for this is first to show that religion is not contrary to reason, but worthy of reverence and respect. Next make it attractive, make good men wish it were true, and then show that it is.”   I like his optimism!

Jesus said, “The truth will make you free.”  He was talking about something reasonable, worthy, and attractive.  Don’t you wish it were true?  It is!  He is talking about Himself.  “If the Son makes you free, you will be free indeed” (John 8:31-36).  Abdu Murray, author of Saving Truth explains what this means for everyday life.  “Freedom is linked to Truth, and that means that we have the freedom to do what we want, in accordance with what we should, based on what we are, creatures made in God’s image.”

With or without religious freedom, we still offer Jesus to our friends, and to a world deceived into captivity by truthlessness.  Dietrich Bonhoeffer, in a letter from a Nazi prison wrote, “May God lead us kindly through these times, but above all, may God lead us to Himself.”  Well said.  Only then can you be free indeed.

Burdened Beyond
Scroll to top