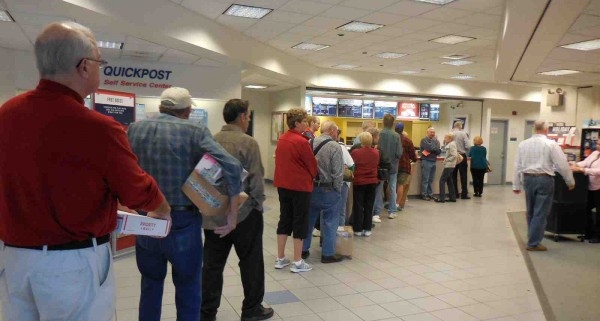 “I am the vine, you are the branches; he who abides in Me and I in him, he bears much fruit, for apart from Me you can do nothing.”- Jesus

Ahead of me in line at the post office was a young mother with a toddler. An older woman couldn’t help but chatting with the mom about the cute and active boy. As the conversation meandered, they touched in a lighthearted way on human foibles. Without hesitation the mom said, “Well, I’m so glad I have a forgiving Savior!” My heart leapt and I wished those further away in line could have heard that. Just then the older woman said, “I’m sorry, I didn’t hear you?” Then the mom spoke it again, firmly and clearly for customers, clerks, God, and the angels to hear! Now you have heard it, too.

What does Jesus mean by bearing fruit? Is it not living with transparency about what ultimately matters and sharing that with fellow travelers? What is abiding, if not trusting Him to place you in a line at a post office at a particular moment and prompting you to speak? Moments like those add up to a lifetime of fruitfulness.

Martha Williamson became a Christian in 1981 a few years after beginning her career in Hollywood. She was an associate producer and aspiring writer but her earnest desire was for Jesus to bear fruit in her career. About her abiding lifestyle Chuck Colson writes, “She would do what God put before her and let Him take her where she was meant to go. She believed that He knew the deepest desires of her heart and that He knew what He wanted for her. She would entrust everything to God’s care.”

Her big break came when CBS asked her to be the executive producer of a show with a religious theme. But she turned them down.  It did not reflect what sincere people of faith believed. It was a silly caricature of spirituality. The day before her deadline to accept a job at another network, she woke up and realized God wanted her to stay at CBS. She gave up the sure job and took her pitch to CBS to rethink their religious show. They accepted her proposal.

The result was “Touched by an Angel,” featuring Roma Downey and Della Reese. Every episode promoted the theme that God loves people and cares for those who are hurting. It followed the Biblical theme of angels as messengers. The show lasted nine seasons and continues to broadcast around the world in 60 languages. Williamson remains a fruitful Christian influence in Hollywood.

Whether in a Tinsel Town studio or a downtown post office, the Lord Jesus bears fruit in those who abide in Him. That is how you reflect the image of God imprinted on your soul.

Man of Prayer
Scroll to top