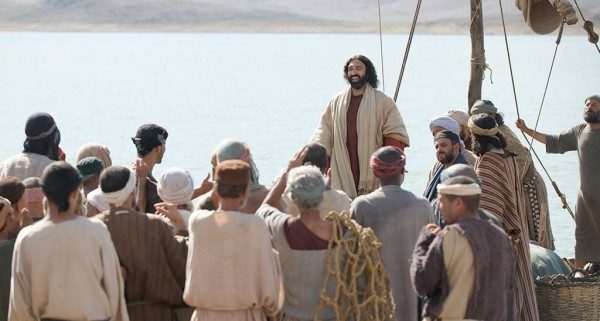 The words “Go away!” are not exactly welcoming.  Is it fair to say that to someone that loves you and wants the best for you?  What if that someone is God?

One time, some fishermen plied their trade all night, to no avail.  Morning found them stowing their gear near the lake, but based on a tip they decided to try again.  This time they netted so many fish that their two boats began to sink.  The fishermen were Peter, James and John.  The tipster was Jesus.

You might think they would jump for joy, and thank Jesus for a true fishing tale!  But Peter’s response was, “Go away from me Lord.”  Humility seized him such that he added, “for I am a sinful man” (Luke 5).  He was in the presence of the One that knew his heart.  Isaiah had the same reaction when he had a vision of the Lord sitting on a throne.  “Woe is me, for I am ruined! Because I am a man of unclean lips” (Isa. 6:5).  He had seen the King and became self-conscious.

Popular culture encourages distance from God, but not because of humility.  Pop singer Gloria Estefan’s song “Go Away” says, “Thoughts of you won’t ever cross my mind.  It’s the truth, don’t mean to be unkind.  ‘Cause people have the right to party and you won’t let them have their fun.”  God is a pleasure-snatcher, so let’s put Him out of our minds.

Modern entertainment cheapens the idea of fun and pleasure to the point of being double-minded.  Look no farther than playboy Hugh Hefner, hailed as an American icon in his passing, yet Hollywood’s Harvey Weinstein is a pariah when he acts on the values Hefner portrayed.  They would have you face the final curtain and declare with Sinatra, “I did it my way.”

To draw near to God is to find deep and abiding joy.   He wants you to be adopted into His family through Jesus, to hope in Christ, and to receive an eternal inheritance, “to the praise of his glory!” (Eph. 1:6,12,14).  God is good, and is good to you.  But if your life is a pursuit of what feels good, you’ll miss that.  Only God can weave the tapestry of your life and the lives of people around you into eternal good, even if the process doesn’t feel fun in the moment.  Considering that, why live as though you want Him to go away?  Be careful what you ask for.

Jesus didn’t go away when Peter asked.  But later, Peter did not repeat the request when he witnessed the majesty, honor, and glory of Jesus (2 Pet. 1:16-17).  By faith, Peter drew near to God.  Peter is smart.  Be like Peter.