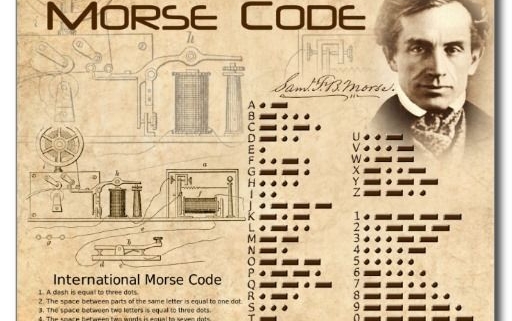 Samuel Morse was a portrait painter in 1825. He was away from home working in New York City when he received a message that his wife was sick. The next day another message said she had died. He immediately rushed home only to learn that she had already been buried. Working through his grief, he determined to improve long distance communications.

In the decades to come, he contributed to the invention of the electromagnetic telegraph, and received a patent for it. He crafted a transmittable alphabet. In 1844, he transmitted a long distance message in Morse code from the Supreme Court chamber in Washington D.C. to Baltimore. The historic first message was, “What hath God wrought?” (Num. 23:23)

That question is part of the story of Balak urging the prophet Balaam to curse God’s people, even though God had blessed them. The immediate retort was that God is not fickle or changeable, like humans. He had already declared that Balaam was not to curse the people. Instead he was to bless them, and the time or place of the question didn’t change the answer.

Israel was not like the other nations which relied on mysterious divinations to communicate with their gods. Israel enjoyed immediate revelation from the one true God. The evidence was in how He guided and empowered them, not least of which was the liberation of His people from Egypt. The people knew the answer to “What hath God wrought?” because they saw it. No words of Balak or Balaam would alter the blessing.

From that time, to the time of Christ, to now, God has not changed. He reveals Himself and His works. Even when you simply take a walk in the woods, His nature is “understood through what has been made” (Rom. 1:20). The greatest deed God hath wrought is recorded in history, never to be forgotten, and forever unchanged. “God so loved the world, that He gave His only begotten Son” (John 3:16) to die on a tree to set you free. I cannot say that’s what Mr. Morse had in mind, but it seems a distinct possibility.

We need no long distance communication from God; He is immanent and accessible. We need no mysterious means to know about Him; He has revealed Himself. He has declared truth that does not change; religious whims of the day notwithstanding. He is hope for the widowed, comfort for the grieving, and love for the lonely. He is a friend to the traveler, the forgiver of the repentant, and the anchor for your soul. The one who practices truth has come “to the light, that his deeds may be manifested as having been wrought in God” (John 3:21). By faith in Jesus you have a purposeful and eternal life. That, God hath wrought.