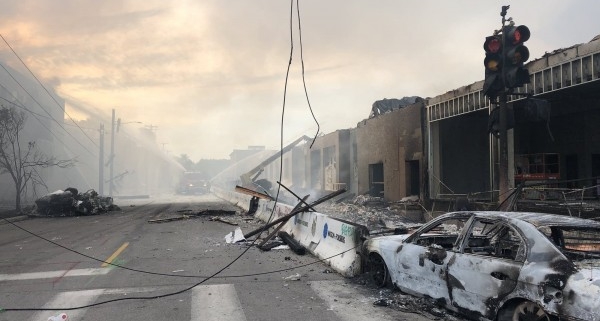 “No one is good except God alone.” – Jesus

Every day we are bombarded with what’s wrong in the world.  I just saw a photo of a post-riot street in an American city showing destroyed buildings, burned out automobile hulks, dangling utility lines, and smoky haze.  Maliciously damaging someone’s property is bad.  In the background of that photo, a firetruck is dousing the smoldering ruins.

A steady stream of such news stories disabuses us of the notion that humans are basically good.  Too much evidence exists to the contrary.  The Christian concept of the “fall of man” reflects what we observe – the world God created and called “good” is infected.  G. K. Chesterton pointed out that the fall is the only part of Christian theology which can really be proved, yet people “deny human sin, which they can see in the street.”  We can stipulate that people know what is good and may try to suppress the bad (put the fire out), yet our experience is that something is fundamentally broken about the world and the people in it.

Is it the concept of God that is broken?  Anyone who would restrain my choices and self-expression is bad, including God, so the argument goes.  Yet His unfathomable goodness and grace is why He calls you to deny yourself.  As the Creator loves you, so He beckons you toward what is right, true, and fulfilling.  Sam Allberry said, “If we know that God’s words are good, we can live with constraint.  We can live with sacrifice.  We can say no to very deep desires that feel innate.”  Taste and see that the Lord is good!  His yoke is easy and his burden is light. (Psa. 34:8, Matt. 11:30).

This is the God who created the universe and surrounded you with such natural wonders.  What attribute would move Him to create you with freedom to either love or ignore Him?  Why would He offer a divine solution to your brokenness in real time?  How do you respond to a just God who by grace through faith redeems your soul for eternity? “Give thanks to the Lord, for He is good; for his lovingkindness is everlasting” (Psa. 107:1).

The evidence shows that God is perfectly good and humanity is not.  But God in His mercy made a way for you to share His righteousness.  Jesus, God the Son, walked on this earth to display goodness by teaching and healing, and to convey goodness by taking the fall for you. He got canceled by the mob who came for Him even though He is good.

This cultural moment may insist that you are basically good, but according to God you need to be restored, redeemed, and renewed.  That’s why it’s good news that God is good.