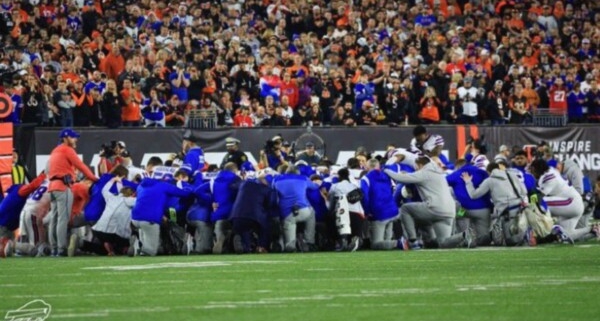 Buffalo Bills football player Damar Hamlin suffered a heart attack during a game. Millions of TV viewers and stadium fans were shocked at the scene as emergency medical staff rushed in. Players gathered on the field in a circle weeping and praying while Bills trainer Denny Kellington performed CPR.

ESPN personality Dan Orlovsky prayed on live TV. “We want answers, but some things are unanswerable,” he said. “We just want to pray, truly come to You and pray…for Damar.” Later he posted on Twitter, “Where two or three have gathered together in My name, I am there in their midst” (Matt. 18:20).

The automatic response appealing to God to intervene is not uncommon. Remember the surge in church attendance after 911? What does this tell us? The secular worldview is not large enough to encompass the human experience. An awareness of God’s existence and even His proximity erupt into your consciousness even if you are not believing or seeking. Helplessness and desperation will test your worldview. I know of an avowed atheist who kept pleading “Oh God” at the scene of his serious car accident. The philosophers can debate if there really is such a thing as an atheist. Nietzsche argued, “God is Dead.” He also went insane while holding that thought.

The Bible says, “That which is known about God is evident within them; for God made it evident to them” (Rom. 1:19). It cannot be easy to suppress that internal knowledge since evidence for God abounds. It will not be suppressed when helpless millions watch a young man dying on a football field.

Humans are hard-wired to know there is Someone beyond ourselves. That doesn’t mean prayer comes naturally, but it can incite curiosity. Norman Rockwell captured that curiosity in his painting, “Saying Grace.” The grandmother and child pray at the diner while fellow patrons stare at them.

But make no mistake. A curiosity about God and prayer, an awareness of God, even a prayer in crisis are not enough. That same God has revealed Himself through nature, in the written word, and by stepping into human history. He has a high moral standard, which you cannot meet. But all is not lost, because He died on the cross to make you blameless, even holy. By faith in Christ you receive forgiveness and new life. “With the heart a person believes, resulting in righteousness” (Rom. 10:10).

Jesus once explained that a man was born blind “so that the works of God might be displayed in him” (John 9:3). That’s not easy to contemplate. But as Damar Hamlin is now at home recovering after over a week in the hospital, he can fairly claim that same result. God is there and is at work in the world, and in you.