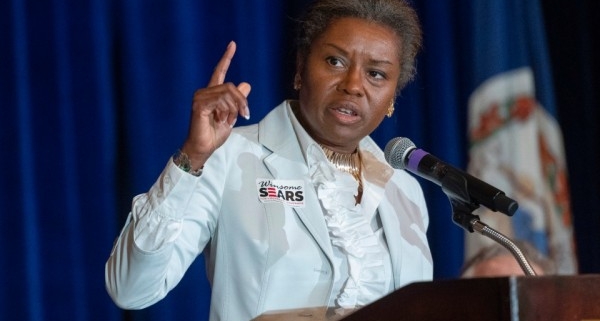 Winsome Sears immigrated to the United States from Jamaica when she was six years old. That was in 1963. Her name would not have been in the 2021 headlines except for her ability to survive a searing loss that few among us must endure.

Her grandmother modeled a vibrant Christian faith, which Sears also embraced. When her grandmother died, Sears joined the Marines to learn discipline and leadership. After leaving the Marines, she and her husband moved to Virginia where she earned a college degree and became an elected official.

Sears left electoral politics to focus on her family.  She and her husband started a small business, and she directed a homeless shelter. In 2009 she published a book about dealing with doubt titled, Stop Being a Christian Wimp!” Two years later, tragedy struck.  Her daughter and two granddaughters were killed in a car wreck. She recalls receiving the news at 3 a.m. “I just remember saying ‘The Lord giveth and the Lord taketh. Blessed be the name of the Lord.’ ” I can’t imagine the pain, the questions.

Professor John Lennox writes, “If Christian faith is worth considering, it needs to be deep enough to cope with our most heart-rending questions.” When those questions erupt, it compounds the tragedy if your answer is that a good and loving God does not exist. The pain is real because evil is real, but God is present and has done something about it. The cross and resurrection of Christ Jesus are the divine intervention in human history to overcome the evil that besets us. Those events reveal an eternal reality beyond our present griefs.

God experienced the pain of grief. When his friend Lazarus succumbed to illness, Jesus wept after he told Martha, “Your brother will rise again” (John 11:23). Theirs was the pain of walking “through the valley of the shadow of death.” But Jesus was there to embody the great promise, “I fear no evil for You are with me” (Psa. 23:4).

In God’s Providence, good can come from pain. C. S. Lewis writes, “Pain insists upon being attended to.  God whispers to us in our pleasures, speaks in our conscience, but shouts in our pains: it is His megaphone to rouse a deaf world.” If tears help you hear from the One who promises a day of no more tears, then pain is redeemed (Rev. 21:4).

God values your life enough to make traveling this earth your opportunity to know Him.  It helps that He chose to walk this path of pain Himself. He is a winsome God, and He invites you walk with Him in faith through your valley of the shadow of death.

Before her recent electoral victory Sears reflected on what her future might hold.  She said, “You always know that God is there.” The voice of experience.