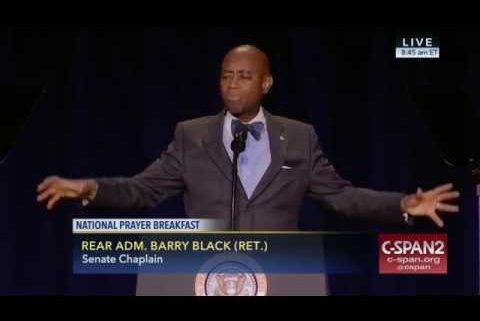 Acting out a parody of Barry Black, Saturday Night Live had him praying, “Lord, bless and forgive these braying jack***es.” The man they parodied is a retired Rear Admiral, now Chaplain of the U.S. Senate.  How did he appear on SNL’s radar?

Actually, Dr. Black took it all in good humor. It happened during 2013 when the government “shut down” over budget bickering.  His pointed and colorful prayers in the Senate chamber obviously attracted attention outside the room, hence his “appearance” on a comedy show.  But his prayers were quite serious, asking divine intervention on behalf of the Senators, “replacing cynicism with faith and cowardice with courage.”  “Save us from the madness.  Deliver us from the hypocrisy of attempting to sound reasonable while being unreasonable.”  The man of five academic degrees, whose biography is entitled “From the Hood to the Hill,” speaks with courage and authority.

So with Dr. Black as the featured speaker, dignitaries gathered with great anticipation at the 2017 National Prayer Breakfast. His concern was not that his booming baritone voice be heard in that room, but that God’s people make their voices heard in heaven.   He noted the many weekly Bible studies and prayer gatherings for officials and staffers on Capitol Hill, and the many prayers for God’s will to be done in the last election.

Quoting Tennyson, “More things are wrought by prayer than this world dreams of,” Dr. Black is convinced of the efficacy of prayer. He said, “When we make our voices heard in heaven, it makes a palpable difference” on earth.  His principal text was also Franklin Graham’s at the inauguration, 1 Tim 2:1-4, which calls for prayer “on behalf of all men, for kings and all who are in authority.”

He explained that we pray from our need and with intimacy. “Be anxious for nothing, but in everything by prayer…let your requests be made known to God” (Phil. 4:6).  Need motivates prayer, both personal and national. Our nation needs healing and restoration of common decency and purpose.  Jesus called his disciples “friends” (John 15:15).  It is an intimate touch when God’s hand is on you, like on Jabez and Ezekiel.  He wants you to trust Him as a close confidant.  Dr. Black urged prayer that God’s hand would be on those who govern us, to which he received a hearty applause.  “The king’s heart is like channels of water in the hand of the Lord; He turns it wherever He wishes” (Prov. 21:1).

Our prayers are founded in hope. From Edward Mote’s hymn, “My hope is built on nothing less than Jesus blood and righteousness.  On Christ the solid rock I stand.”  Dr. Black’s message is well-timed, that your hopeful voice can be heard in heaven!