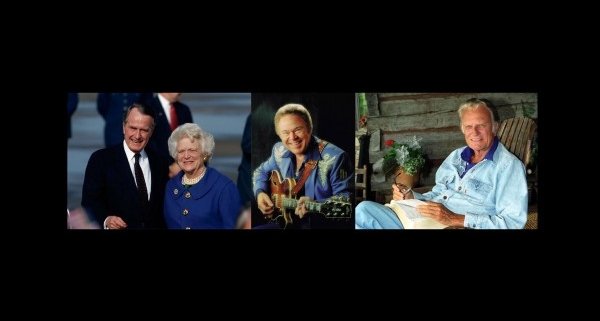 I don’t like goodbyes. Well I’m not sorry to see some things go, but you know what I mean. Looking back on 2018, we said goodbye to some notable people. Sometimes when people pass it feels like a season coming to a close.

Let’s remember some who died in 2018. Barbara Bush died in April, followed by her husband George H.W. Bush in November. They were married 73 years, the longest married couple in presidential history. He was the last WWII hero to serve as President.

Roy Clark, the country music star, died at age 85. One of his hits was a lament about wasted youth. “So many songs in me that won’t be sung. The time has come for me to pay for yesterday, when I was young.” If you don’t like modern country music or if you share his lament, you felt it when Clark left the stage.

Billy Graham lived to be 99. He emerged as an evangelist in 1949, and in his lifetime would share the good news of Jesus Christ to more people than anyone in history. He began with trains and tents and ended with electronic media and satellite communications. May God in his Providence raise up another, but we know there will be only one Billy Graham.

There are others whose passing marks the end of an era: Aretha Franklin (singer), Stephen Hawking (scientist), Willie McCovey (athlete), Tom Wolfe (author). But none of these affect you as much as your own personal losses this year. It marks the passing of time when you lose someone who lived a long life. It’s a tragedy when someone dies too young.

The Bible says that believers do not grieve as those who have no hope (1 Thes. 4:13). By faith in Jesus Christ, and because of his Resurrection from the dead, we have the hope of eternity. The passing of a legend or loss of a loved one, the end of an era or the changing of a season only remind us of that hope.

Hope to the Christian carries no uncertainty. “Faith is the assurance of things hoped for, the conviction of things not seen” (Heb. 11:1). The Spanish verb “esperar” helps us here. It means to hope, wait, or expect. We have considered the evidence, and are simply waiting, expecting for our hope to be realized.

Christ Jesus is your hope that there’s more to life that what you see. He is your hope for this life, not just the next. A great mystery is revealed, “which is Christ in you, the hope of glory” (Col. 1:27). This hope is for today. It is for the New Year. It is the grace to face whatever uncertainties, challenges, or goodbyes 2019 may bring. This hope you have is the anchor of your soul. You cannot live without hope.

“Re” Words
Scroll to top