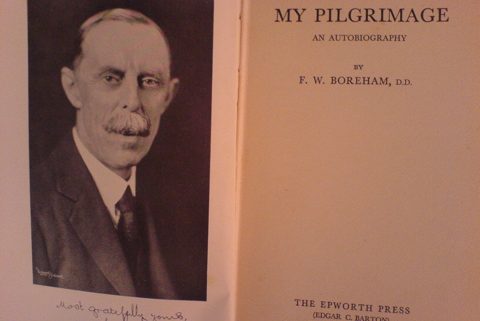 Reading a nursery rhyme is probably not where you would first look for life inspiration. But a keen observer knows we are surrounded with clues that point to the meaning of life.  F. W. Boreham was such an observer.

Born an Englishman in 1871, at age 23 Boreham sailed for New Zealand to accept the pastorate of a new church in Mosgiel.  A few years later, he was in a nearby town to speak.  The service went long, and he missed his evening train.  As he waited for the next train, he noticed a light at the Otago Daily Times.  He stepped in to visit with the editor and inquire about publishing essays.  The editor needed an editorial for the next day so Boreham, though pressed for time to catch the last train, jotted out an 1100 word essay.  He went on to publish thousands of editorials and essays, and over 50 books.  Ravi Zacharias calls Boreham, “my favorite essayist.”

Perhaps his most popular piece is taken from the nursery rhyme “The House that Jack Built.” The tale begins with Jack building his house, then extends to all the creatures and people affected by or connected to Jack.  Horse, cow, dog and cat make an appearance, as do the farmer sowing his corn, the judge shaven and shorn, the man tattered and torn, and the maiden all forlorn.  Boreham writes, “The intricate comedy of The House That Jack Built is indisputable philosophy.”  He explains that our lives have an indirect line of influence that we may never know.  “You can live a life that tells on (impacts) other lives, and makes the world less full of evil and of pain, a life which, like a pebble dropped in the sea, sends its wide circles to a hundred shores.”

Jesus may have anticipated this when he told stories of sowing seeds, giving cups of cold water, and going the extra mile. As we invest love, kindness, and truth in our fellow man, God can use that influence far beyond what we will ever know.  “You are the salt of the earth” and “You are the light of the world” are his appeals to lives that matter because of a God-given purpose (Mat. 5:13-14).

When Boreham was a baby, his nanny took him to the park where an old woman approached, held his hand, and said, “Tell his mother to put a pen in his hand and he’ll never want for a living.” Encouragement given to nanny, mother, then son, and now almost 150 years later, you could be influenced by that old woman by reading this.  So Boreham’s life illustrates his thought that “We are living in a world in which no person can do one thing without doing a million things.”  Life is a treasured gift.  Invest it wisely.

Body of Christ
Scroll to top