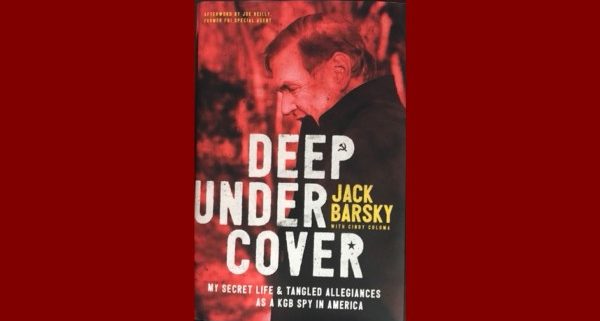 To me, his weathered countenance seemed beyond his 68 years, and his American accent was hard to place. There are reasons.  Jack Barsky was a KGB undercover spy in the United States.  But though his life was fake, he found something more real than he ever had behind the Iron Curtain.

A “60 Minutes” piece in 2015 and his recently released biography “Deep Undercover,” tell the riveting story. It seems unbelievable that he could become so successful and visible in his assumed American identity beginning in 1978.  Even more amazing, he escaped the tentacles of the KGB in 1988.  But the fall of the Berlin Wall and the collapse of the Soviet Union within the next few years did not change his past.  The FBI caught up with him in 1997.

As a child Barsky rarely sensed love or even tenderness from his parents even though he tried to earn it through academics. He learned to stuff his emotions and internalize pain, qualities needed for a hard-nosed spy.  As a young man, he fathered children but could not love them.

Something changed in 1987. His American wife gave birth to a daughter, Chelsea.  The child’s unquestioning love astounded Barsky, and made him see the world with new eyes.  So, when the KGB warned him to return, he could not.  His unconditional love for his daughter remained, but his marriage ended.  Chelsea’s departure for college unleashed the pent up emotions of his life, and he fell into intense loneliness.

God spoke to him through that pain. His new assistant at work, Shawna, had an inner peace that attracted him.  She explained, “I get my strength from Jesus.”  She gave him a Bible to read, and followed up with discussions about it.  He accepted an invitation to accompany her to church.  The pastor pointed him to “The Case for Christ” by Lee Strobel.  He listened to the radio program “Let My People Think” by Ravi Zacharias.

Barsky was convinced by C. S. Lewis’s claim in “Mere Christianity” that Jesus is not just a great teacher, because what He taught means He is either a liar, lunatic, or Lord. What made sense in Barsky’s mind became real to his heart in a startling moment.  On a golf course, he was looking up at clouds “as a profound and otherworldly awareness began to grow in me.  He is!”  In embracing Jesus Christ, his faith is “the assurance of things hoped for, the conviction of things not seen” (Heb. 11:1).

As we chatted, Barsky said, “America has stopped thinking. It’s all about feeling now.  Young people need to be de-programmed and taught how to think critically.”  His quick smile and warm manner hint that he’s been de-programmed from lies and loneliness.   Love and faith can do that to a man.

Go Away
Scroll to top