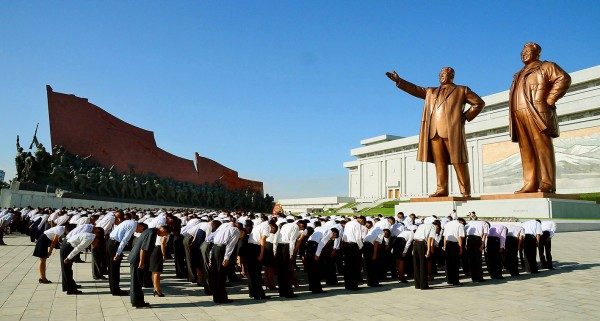 I hope the war of words between the U.S. and North Korea cools off.  Secretary of Defense Mattis said that a war would be catastrophic.  I assume he was thinking about all affected parties, including the oppressed people under the rule of Kim Jong-un.  That said, history reveals what the real battle is here.

Horace Underwood (of the typewriter family) began his work in 1885 as one example of many early Christian missionaries that worked in Korea.  In 1907, a revival in the country set off three decades of growth for Christianity despite Japanese influence in the country and their resistance to the faith.  Rejecting the Japanese demand to worship their emperor, many Koreans embraced faith in Jesus Christ instead.

By the 1930’s, Christians were the civic and intellectual leaders in Pyongyang, which had become known as the “Jerusalem of the East.”  (Ruth Bell Graham attended high school in Pyongyang while her parents worked in China.)  After WWII, the rise of communism drove Christians to the South.  Many stayed in the North where the Soviet Union installed Kim Il Sung as leader of communist party.  Diverging somewhat from the atheistic communism of the 20th C., he demanded nothing less than worship from the people, under pain of death.  His grandson now rules the country, having been taught all his life that he is a god to be adored.

The result?  North Korea tops watch lists for evil, repressive regimes.  Christians whose grandparents refused to worship the Japanese emperor now refuse to worship the “dear leader.”  They meet in underground churches or attempt escape at risk of beating, starvation, cold exposure, rape, exile to hard labor camp, and execution.  History repeats itself.  In ancient Babylon, three Jewish lads refused to worship the king.  Threatened with death, they replied, “Our God is able to deliver us, but even if He does not, we are not going to worship the golden image” (Dan. 3:17-18).  As faith views eternity, it says, “Though He slay me, I will hope in Him” (Job 13:15).

Open Doors, a ministry to persecuted Christians, reports how Kim Sang-Hwa as a child found her parents’ Bible.  She considered reporting them, but decided to ask about it.  They explained creation, sin, the Savior, and the second coming.  She observed her father lead a dying man to faith in Christ, even though he spied on the Christians.  She believed.  Kim later escaped to South Korea via China.  She still carries a burden for her fellow North Koreans since she knows the evil they face.

Kim represents a victory in the spiritual battle for the lives of a people brutalized by a totalitarian kingdom.  Let us pray the Lord send a new revival to Korea, to deliver them from evil and make Pyongyang once again the Jerusalem of the East.  That’s the real battle.

The News
Scroll to top