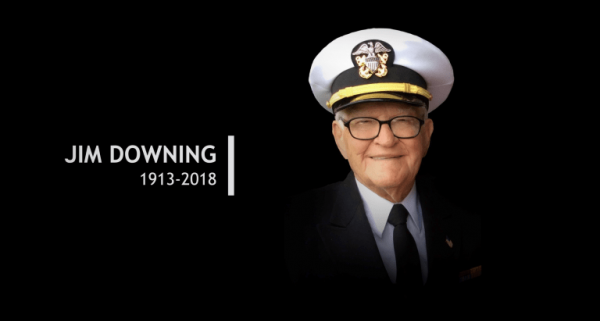 One of our oldest Pearl Harbor veterans passed away this year. Jim Downing died in February at age 104. After surviving “a date which will live in infamy,” he completed his Navy career, met multiple Presidents, and became the oldest male author on record with his 2016 biography, “The Other Side of Infamy.”

His story begins in a small town in Missouri. He came of age during the Great Depression, and left to join the Navy. While living in southern California, he met Dawson Trotman, founder of the Navigators ministry. Trotman had led five of Downing’s shipmates to Christ, and through their influence he became a believer also.

In 1941, Downing was stationed at Pearl Harbor. He was the ministry leader aboard the USS West Virginia, and hundreds of his shipmates had become followers of Jesus. In December, he had been married to Morena for five months when their world changed. The attack on Pearl Harbor forced her to evacuate for the mainland on Christmas Day. They were apart for 18 months.

During the attack, Downing rushed to his ship which rested on the bottom of the shallow harbor. He slid down one of the USS Tennessee’s guns to reach his ship’s deck. He directed a fire hose toward ammunition lockers. “I slowly moved toward the stern to water down more areas. Several bodies lay on the deck around me. No one else would be able to tell the parents of these men what had happened to their sons. I decided it was my responsibility to learn their names so I could report what I knew to their mothers and fathers.”

The USS Neosho, a fuel tanker, was nearby. During the second wave of the Japanese attack, the planes swarmed the Neosho. “One of those bullets is going to hit pretty soon, I thought. God, I’ll be with you in a minute. Another minute passed. Suddenly my fear melted away, replaced by the most overwhelming sense of peace I’d ever felt. For the next half hour I expected to die in the next minute. I was sure I would be ushered into God’s presence – and that was fine with me. Peace.”

But he had more to do. In1956, after 24 years in the Navy, the Navigators asked Downing to take a leadership role after the tragic death of Trotman. He and Morena served the Navigators until and beyond his retirement in 1983. The last few years of his life, he emphasized relationships with God, family, and friends. “I’m satisfied as long as I can have those three things,” he said.

Retired Navy Lt. Downing lived life well, faithful to this truth: “I do not consider my life of any account as dear to myself, so that I may finish my course and the ministry which I received from the Lord Jesus, to testify solemnly of the gospel of the grace of God” (Acts 20:24).

God With Us
Scroll to top