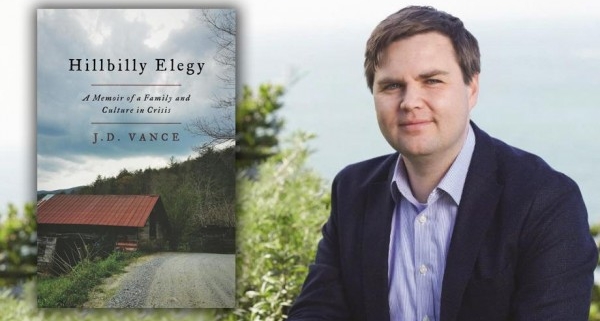 Former Sen. Zell Miller resisted the term “hillbilly” as derogatory.  But J.D. Vance claims to be one, and writes from that perspective in Hillbilly Elegy.

The short version of Vance’s story is that his grandparents were dirt poor and in love.  They married and moved north to escape dire poverty.  Their grandson (Vance) would graduate from Yale Law School.

Vance moved in with his Mamaw during his high school years when his mother could no longer provide for him.  He thought education was pointless, opportunity was elusive, and life was hopeless.  But Mamaw believed he had a chance to escape the misery.  Once, she bought him a calculator. In her salty way she yelled, “Have you finished your math homework?”  “No Mamaw, not yet.”  “Well you (dang) well better start.  I didn’t spend every penny I had on that little computer for you to (laze) around all day!”

She challenged him because she loved him and he knew it.  When he was at Marine boot camp she wrote daily, sometimes multiple letters.  He writes, “I read every day that Mamaw was proud of me, that she loved me, and that she knew I wouldn’t give up.”  She loved him too much to affirm his fall into the familiar trap of bad choices and underachievement.

That’s too rare these days.  “We are in a culture that says the most loving thing you can do is to affirm someone in their own choices,” says John Stonestreet of the Colson Center.  What if those choices are culturally embraced but personally destructive?  Can true love affirm what is harmful or untrue?

As followers of Christ, we love like He did.  He did not affirm a young man’s reliance on wealth but said, “With God all things are possible” (Luke 18). He did not affirm Zaccheus’ fraud, but was willing to associate with him (Luke 19).  He did not affirm the Samaritan woman’s lifestyle, but offered her “a well of water springing up to eternal life” (John 4).

Today’s chaotic and confusing cultural moment begs for displays of the clarifying love of God.  That doesn’t mean you must change people or fix all that’s wrong in the world.  But you can “be kind to one another, tender-hearted, forgiving each other, just as God in Christ also has forgiven you.  Therefore be imitators of God, as beloved children and walk in love, just as Christ also loved you” (Eph. 4:32-5:2).

An “elegy” is a serious reflection on something of importance.  Vance reflected on “what it feels like to nearly give up on yourself and why you might do it.”  You can reflect on this: To imitate God is to love someone by sacrificing something.  That kind of affirmation must elevate truth over choice.  May that love elegy move you to love like Jesus.

Good or Bad?
Scroll to top