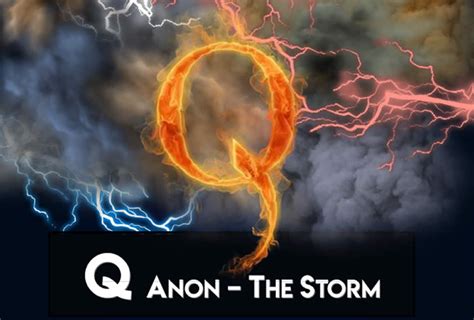 Have you heard about the conspiracy theory called QAnon, or The Storm?  Its adherents are developing it to explain politics and current events.

QAnon is quite speculative, and many observers call it baseless.  It enfolds many previous conspiracy theories into one.  It includes places (Babylon, Area 51, Charlottesville) and presidents (Washington, Clinton, Trump).  It links people (Putin, Zuckerberg, Princess Diana) and movements (French Revolution, Antifa, MAGA).  It tries to make sense of the world.

Everyone has a way of interpreting the world around us.  Your judgments, preferences, and views are framed by life’s ultimate questions.  Ravi Zacharias identifies these as: Where did I come from? What is life’s meaning? How do I define right from wrong?  What happens when I die?  These confront every religion and philosophy.  Here are a few coherent responses that touch on the worldview of orthodox (traditional, Biblical) Christianity.

Origin: The Bible says God created humans in his image to rule over the other creatures (Gen. 1:26).  From this, we know that humans have a value that no other creatures have.  You know intuitively that killing a child on a playground is different than killing a rat in a lab, despite protestations of animal rights activists.  It is when humans are devalued that injustice, racism, and genocide happen.

Meaning:  We are meant for another place.  The Bible says we have eternity in our hearts, and citizenship in heaven (Ecc. 3:11, Phil. 3:20).  Recently deceased Charles Krauthammer, a skeptic, wrote, “You’ve got to explain the existence of the universe.  Why can there be anything, and how can there be consciousness?”  When your foundation is eternity, life’s questions and woes are less daunting.  Without eternity, you are dust in the wind.

Morality:  Chicago mayor Rahm Emanuel spoke about that city’s violence.  “I am asking that we not shy away from discussions about the importance of family and faith helping to develop character, self-respect, a value system, and a moral compass so kids know right from wrong.”  When each does what is right in his own eyes, people and communities are hurt.  To be fully human is to love God and neighbor, which Jesus says are the foundation of God’s law (Matt. 22:37-40).

Destiny:  You are accountable to the Creator, who wants you to share eternity with Him.  Yet you must be made whole since all are sin sick.  God the Son “bore our sins in His body on the cross, so that we might die to sin and live to righteousness; for by His wounds you were healed” (1 Pet. 2:24).  By faith in Christ, you can live like there is a better tomorrow, forever.

To some, Christianity is no more plausible than the latest conspiracy theory.  But its answers make sense of the world as we experience it, and that draws you to the Shepherd and Guardian of your soul.