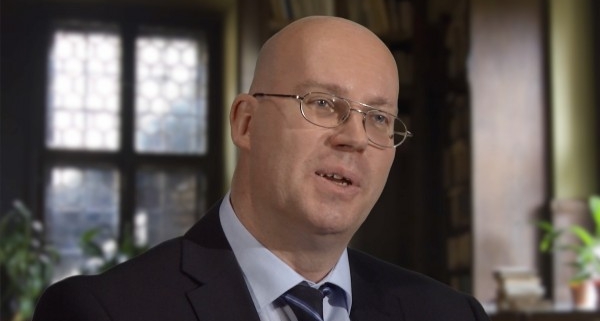 Gunter Bechly’s views evolved, as they say. And it cost him. If you like science and a true story with conflict and drama, do a web search on this distinguished professor.

In 1999, Bechly received a Ph.D. in paleontology and became curator of insect fossils at the State Museum of Natural History in Stuttgart, Germany. The museum asked him to direct the Darwin Day exhibit, so he decided on a design to refute Intelligent Design theory. Being a thorough researcher, he read ID proponent Michael Behe’s book, Darwin’s Black Box.  Bechly began to discover scientific answers to his quest for a coherent world view. Bechly “came out” as a Darwin skeptic in 2015, and promptly lost his job as curator. To add insult, Wikipedia erased him (temporarily) as no longer notable.

Bechly read Behe’s evidence that a series of slight, successive mutations, key to Darwin’s theory, cannot produce a living cell. Behe describes the “irreducible complexity” of cellular nanotechnology, i.e. tiny machines that Darwin could not see inside a cell. One example is the flagellar motor with a rotor, stator, drive shaft, bearings, and propeller. It changes direction using a signal transduction circuit that detects sugar gradient as a guide to a food source. The various parts of this nano-machine are junk without complete assembly. Even if it could happen over eons, what is the source of the factory that built a self-building motor?

Bechly observes, “Of the 99% of (Darwinian) biologists, 98% don’t work on the underpinnings of the theory, they simply accept it as true. The few theoretical biologists who work on the underpinnings of the theory have mostly become critical of the neo-Darwinian process.” At a recent Royal Society conference in London, the opening talk focused on the inability of evolutionary theory to explain evidence. Over 1000 scientists have now signed “A Scientific Dissent from Darwinism.” No consensus exists.

If there is a Creator, He wanted us to exist. It is plausible, then, that He would reveal Himself. And indeed, “Since the creation of the world His invisible attributes, His eternal power and divine nature, have been clearly seen, being understood through what has been made” (Rom. 1:20). Science led Dr. Bechly to believe in God.

It is a logical fallacy to doubt Darwin because many scientists have. Nor should you believe in the God of the Bible because in the span of human history millions have. But if you investigate and find the evidence convincing, you may well join with the Psalmist: “Come, let us worship and bow down, let us kneel before the Lord our Maker. For He is our God, and we are the people of His pasture” (Psa. 95:6-7). Meet your Maker: “There is but one Lord, Jesus Christ, through whom all things came and through whom we live” (1 Cor. 8:6).