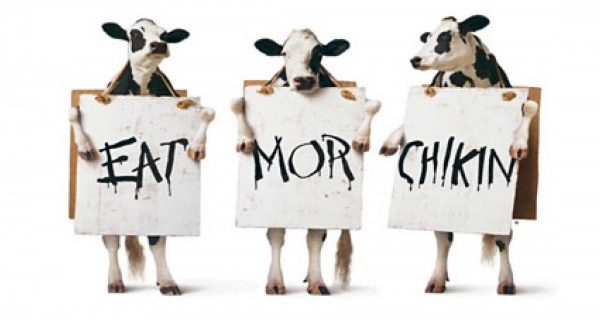 I am a patron of a certain chicken restaurant.  I hope they don’t take exception to my friendly observation that their ad campaign is just wrong.

The award-winning campaign has raised brand awareness and improved sales and profits.  The ads have cows urging people to eat chicken instead of beef.  Their bovine writing adds to the humor.  Here’s what’s wrong.  The cows in the ads are of the Holstein breed.  Milk cows.  As the son of a dairyman, I assure you I don’t require convincing to avoid eating a Holstein.  Wouldn’t a Hereford or Augus have a more personal interest in beef sales than their lactating cousins?  Just sayin’.

Pardon the leap from cows to Christmas, but some get tripped up on that message too.  Well-known atheist Richard Dawkins says he loves Christmas, and celebrates it with family and friends.  He once wrote in the Washington Post, “Christmas belongs to anyone who wants it, and just because I gave up believing in a god doesn’t mean I gave up believing in the love and joy of family.  I did not give up the joy of celebration with my abandonment of the absurd.”

Perhaps Dawkins would be less dismissive if the Christmas story had been a mass marketing event.  What if God coming to earth was a worldwide spectacle, not just for shepherds, replete with brilliant beings and melodious music?  He should arrive to a richly-appointed palace on earth, not a smelly barn for cows and chickens.  How absurd that he didn’t descend from the sky with all nations paying tribute, not just a few wise men!

Jesus came not only to convey a message in a way that would reach you, but to embody that message.  “I am the way, and the truth, and the life,” he said (John 14:6), explaining that “For this I have been born, and for this I have come into the world, to testify to the truth” (John 18:37).  Given the rest of the gospel, neither the method nor the message are absurd!  God coming to Earth is a wonder worth welcoming.