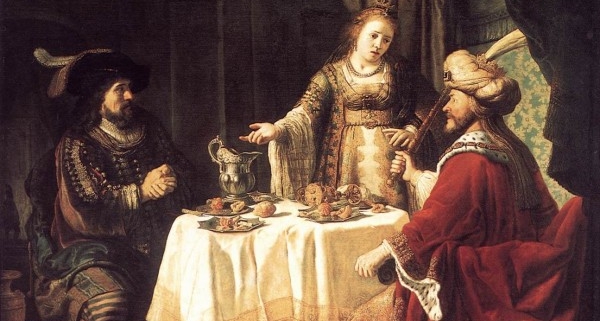 Whoever says the Bible is boring never read the dramatic events recounted in the book of Esther.  It’s about loyalty and royalty, love and hate, life and death.  The plot twists as a man asserts his will against God’s.  It doesn’t turn out well for him.

Haman was king Xerxes’ right-hand man.  As such he expected everyone to pay homage to him, but Mordecai would not.  Haman was infuriated.  He convinced the king to schedule an ethnic cleansing of Mordecai and his people.  While waiting, Haman’s wife and friends goaded him into building a gallows for his nemesis Mordecai.

What Haman didn’t know was that Esther, the queen, was Mordecai’s cousin.  Mordecai urged her to intercede with the king, suggesting she attained royalty for “such a time as this.” Her risk was that anyone who entered the king’s court without a summons risked death.  She went anyway.  When the king did receive her, she invited him and Haman to two banquets.

At the second auspicious event, she announced that her life and her people were in mortal danger.  Shocked, the king demanded to know who would do this.  “A foe and an enemy is this wicked Haman!” she said.  Xerxes then condemned Haman to die on the gallows he built, and issued a new edict to protect Esther’s people.  Haman was hoisted on his own petard.

God is not mentioned by name in the book of Esther, but it’s about His will and sovereignty.  Human foibles and willfulness cannot interdict His divine purpose and interventions in human history. Job said it like this: “I know that You can do all things, and that no purpose of Yours can be thwarted” (Job 42:2).  Esther acted with humility and accepted God’s will, risking her life for others.  Haman acted with pride and rage, asserting his will over others.  She witnessed God’s deliverance.  He learned that “pride goes before destruction” (Prov. 16:18).

Thomas a Kempis wrote, “The humble are always at peace; the proud are often envious and angry” (The Imitation of Christ).  That leaves you with a choice.  Believe things must always go your way and suffer malcontent, or humble yourself before God and enjoy the path of peace and purpose.  That is not easy, and requires a new way of thinking.  “Do not be conformed to this world, but be transformed by the renewing of your mind, so that you may prove what the will of God is, that which is good and acceptable and perfect” (Rom. 12:2).

Would you trust God to transform your will and desires?  Can you say with Oswald Chambers, “I am determined to be absolutely and entirely for Him and for Him alone” (My Utmost for His Highest)?  Does your life declare, “Not Thy will but mine” or “Not my will but Thine”?

The Reveal
Scroll to top