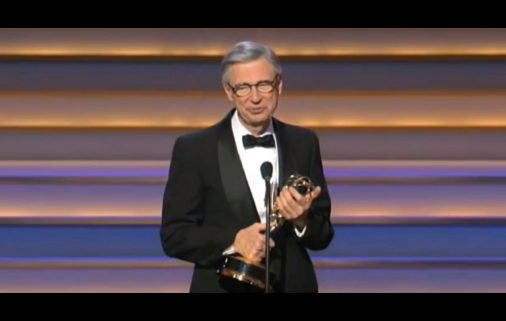 What TV personality walks into the house, removes his jacket and dons a colorful cardigan, then puts on his sneakers, all while singing a song? Of course it’s Mister Rogers.  Fred McFeely Rogers didn’t create a character for TV.  He believed children could spot a phony, so he was just himself.  “One of the greatest gifts you can give anybody is the gift of your honest self,” he said.

Rogers said, “I went into television because I hated it so, and I thought there’s some way of using this fabulous instrument to nurture those who would watch and listen.” TV still needs the spirit of Fred Rogers.  We lost this cultural icon in 2003.  He began in TV in 1951 and produced almost 900 episodes of “Mister Rogers’ Neighborhood” during 1963–2001.

Rogers graduated from Pittsburgh Theological Seminary in 1963.  After ordination by the Presbyterian Church, his ministry was to children and families through mass media.  That year, he accepted an offer from Canada to begin his children’s program.  In 1966, he moved the program to the U.S.

He based his show on the deeply Christian themes of neighbor, love, and acceptance. His goal was to make children feel valuable and loved, and to help them cope with simply growing up, and the complexities of life with grownups.

Jesus spoke on neighborliness with a story about the Good Samaritan (Luke 10). His challenge is to be a neighbor especially to those in need. Rogers appealed to the human need to belong, to be part of a community, at the beginning of each episode.  “It’s a beautiful day in the neighborhood, a beautiful day for a neighbor.  Would you be mine?  I’ve always wanted to have a neighbor just like you,” he sang.

Jesus said that the greatest commandments are to love God, and to love your neighbor (Matt. 22:36-40). He demonstrated love and acceptance while calling people to faith and holiness.  Rogers thought about love this way: “Love isn’t a state of perfect caring.  It is an active noun like struggle.  To love someone is to strive to accept that person exactly the way he or she is, right here and now.”  The call to faith and holiness is most effective in the context of love and acceptance.

In 1997 Rogers accepted a Lifetime Achievement Award at the Emmys saying, “All of us have special ones that have loved us into being,” and asked for ten seconds of silence to think of them. The Hollywood glitterati wept.  He continued, “Thank you for allowing me all these years to be your neighbor.  May God be with you.”  God loved you into being.  In memory of Mister Rogers, take ten seconds and thank God that you are loved, neighbor.