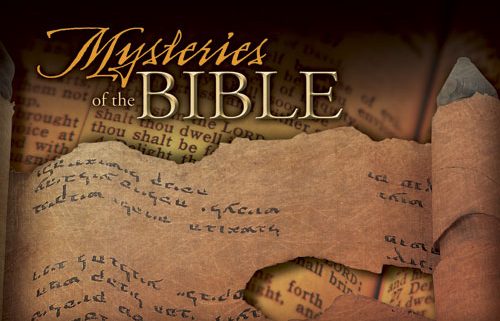 Mystery literature began to develop in earnest in the early 1800’s.  This fiction genre brings to mind Arthur Conan Doyle’s Sherlock Holmes and Edward Stratemeyer’s Hardy Boys and Nancy Drew.  Agatha Christie and Alfred Hitchcock are also notable.  But one usually does not think of the Bible as mystery literature.

Of course a major difference is that the Bible isn’t fiction, demonstrated by prophecies that have come to pass.  In one instance God revealed to Daniel not only the meaning of the Babylonian king’s dream, but what the king saw in his dream, prompting the king to acknowledge that God is “a revealer of mysteries” (Dan. 2:47).  And what God revealed did happen.

In the Hebrew Scriptures, the Messiah was to be a mighty king, but also a suffering servant.  He was to be from Bethlehem, Nazareth, and Egypt.  Indeed a mystery!  Yet now we know how Jesus, God the Son, fulfilled these prophecies and revealed the mystery.  Paul writes that the gospel of Jesus Christ is “the revelation of the mystery which has been kept secret for long ages past, but now is manifested, and by the Scriptures of the prophets, according to the commandment of the eternal God, has been made known to all the nations” (Rom. 16:25-26).

Having established the identity of the Jewish messiah, another mystery emerges.  What about the rest of us?  Are we hopeless, or would God provide a Gentile messiah as well?  Paul explained that the mystery of Christ “has now been revealed to His holy apostles and prophets in the Spirit; to be specific, that the Gentiles are fellow heirs and fellow members of the body, and fellow partakers of the promise in Christ Jesus through the gospel (Eph. 3:4-6).  Good news!

The final mystery is if the world and human history will end.  Modern prophets warn of an epic doomsday from either climate change, nuclear holocaust, or meteor strike.  I propose that since the Bible has proved reliable in proposing and revealing mysteries in the past, we might do well to consider what it says about the future.  The books of Daniel and Revelation speak to the subject, as do the sayings of Jesus (Matt. 24, 25).  Granted these often raise more questions than answers, but that’s OK.  God said some things must remain a mystery.  “Seal up the things which the seven peals of thunder have spoken and do not write them” (Rev. 10:4).  God is Sovereign over the future, and we cannot know all details.

In the Bible, revelation and mystery coexist with God deciding what is revealed and what remains hidden.  He has revealed himself as a God of love not content to leave you in the hopeless human condition.  You can trust Him with this, and the things you cannot know or understand.  I see no mystery in that.

Gift and Glory
Scroll to top