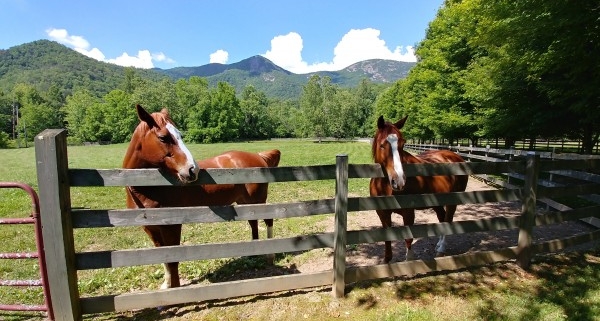 I have found that the most inspiring use of social media is to enjoy the beauty of creation as posted by friends.  They see, they admire, they share.  Simple formula.  I have done the same.

I have seen the ancient Appalachians framing horses and green pastures.  Hikers on high hills marvel at rock formations and unusual flora. Soaring reds and lavenders trail the setting sun promising, “I’ll see you on the other side.”  Today’s warmth lays aside for tomorrow’s gentle snow. Green holly is bejeweled in red and capped in white.  Now do the daffodils awake so soon?  The hungry honey bee considers the humble chickweed’s purple blossom her royal feast.

I’m no poet, but the Creator is and nature is his scroll.  He beckons you to see what he has done, and marvel.  The Bible says, “Since the creation of the world His invisible attributes, His eternal power and divine nature, have been clearly seen, being understood through what has been made, so that they are without excuse” (Rom. 1:20).  If you look at nature and marvel, then you know enough about God to honor him as God.

George Washington Carver certainly did.  He said, “I love to think of nature as an unlimited broadcasting station, through which God speaks to us every hour, if we will only tune in.”  Carver was born into slavery in Missouri.  He became the first black student at Iowa State in 1891, and earned two degrees in agriculture.

As a longtime researcher at Tuskegee Institute, he found alternatives to cotton which was depleting the soil.  He developed hundreds of products from peanuts and sweet potatoes.  He told of his inspiration.  “When I was young, I said to God, ‘God, tell me the mystery of the universe.’ But God answered, ‘That knowledge is reserved for me alone.’ So I said, ‘God, tell me the mystery of the peanut.’ Then God said, ‘Well George, that’s more nearly your size.’ And he told me.”

Carver came to faith as a child.  He saw a boy walking to Sunday School.  “I asked him what prayer was and what they said. I do not remember what he said; I only remember that as soon as he left I climbed up into the loft, knelt down by the barrel of corn and prayed as best I could.  That was my simple conversion.”  That’s the story of the esteemed professor who found beauty in creation and truth in its Creator.  Do likewise, and you will have something inspiring to share with your friends!

“When I consider Your heavens, the work of Your fingers, the moon and the stars, which You have ordained; what is man that You take thought of him, and the son of man that You care for him?” (Psa. 8:3-4).