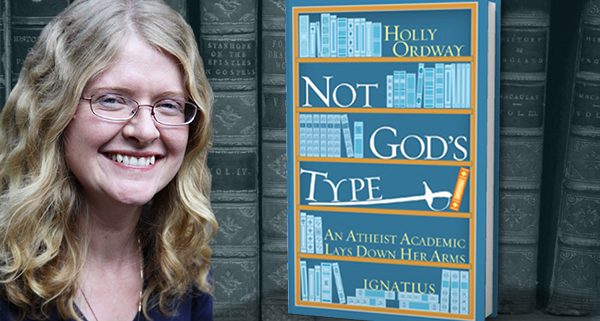 Dr. Holly Ordway was a young English professor. She wasn’t just a secular-minded young professional, but an antagonistic atheist.  Not exactly in the demographic of likely candidates for conversion to Christianity.  But it happened.

She wrote about it in her book Not God’s Type in 2008.  In 2014, she decided to re-write it. The reason is captured in the sub-title change from “a rational academic finds a radical faith” to “an atheist academic lays down her arms.”  The first implied that her conversion was mostly her doing; the second, her surrender to God’s work in her mind and heart.

She was raised in a family that was culturally but not actually Christian. She thought of Christianity as a historical curiosity, and preferred a rationalism that trusts science to explain everything.  Christians were self-deluded as they tried to follow their morality as a set of rules and pious slogans.  She “didn’t know that the church offered a relationship with a living Person who would…transform you into a new person.”

Dr. Ordway’s rational mind began to challenge her atheistic faith when she realized, “I could not explain why I had this moral sense, and my efforts fell short of my ideals.” Seeking answers, she turned to writings by C.S. Lewis and found his explanation of the moral argument for God compelling.  She also read works by William Lane Craig, Gary Habermas, and N.T. Wright.  She concluded that the Resurrection of Christ is historical and believable, and has personal implications.

In the re-write of her book, she added the other components of her life that led to faith: imagination and literature. She said, “My atheist view of the world could not explain why I was moved by beauty and cared about truth.”  As a student of literature, she names Lewis and Tolkien as favorite authors.  She found that the moving poems of Hopkins, Herbert, and Donne could not be separated from their Christianity.  From them she caught “a vision of the world that was richly meaningful and beautiful, and that also made sense of the joy and sorrow that I could experience.”

It was her fencing coach that helped seal the deal. He did not fit her stereotype of Christians as pushy and thoughtless, and offered respectful dialogue.  We believers could use some coaching ourselves, to live in a way that surprises our friends into asking questions; to have respectful and informed conversations about the realities of Jesus our Savior.

None of us are really God’s type. But as Brennan Manning observed, “Tragedy is that our attention centers on what people are not, rather than on what they are and who they might become.”  The humbling and rational message of Christianity is that “Christ Jesus came into the world to save sinners, among whom I am foremost of all” (1 Tim. 1:15).

Thanks Dad!
Scroll to top