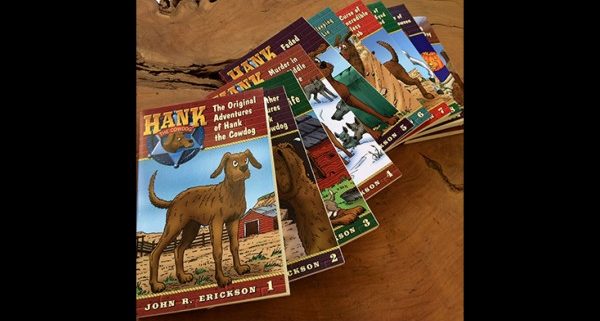 For children on your gift list I suggest a book by an authentic cowboy who spins yarns about the Head of Ranch Security, “Hank the Cowdog.”   If they like it, they can choose from about 70 other tales in print and audio formats.

For full disclosure I have not read these children’s books, but I have read about the author, John Erickson. It’s his story of perseverance that commends his writing.

Except for the few years he spent pursuing his education, Peterson worked all of his life on a ranch, and today he owns a 9-square-mile spread. He has endured brutal cold and searing heat, long days and grueling work making a living with horses, cows, and dogs.  Such a profession demands perseverance.

So does writing. For a while Peterson fancied himself the next Hemingway, but he finally realized, “It might be important for somebody who wants to write about the human experience to know a little bit about it” (as told to Marvin Olasky of World News Group).  So after his studies at Harvard Divinity School in the 1960’s, he became a cowboy again.

But publishers did not want his stories, no matter how authentic. In his cowboy vernacular, “It was like being in a dogfight every day or getting bucked off a horse every morning.”  But he persevered.  With borrowed money he established Maverick Books, and in 1983 he began publishing “Hank the Cowdog.”  He has sold over 9 million books.

Peterson’s mother was the first storyteller he ever knew. She told stories of her West Texas ancestors and read him Bible stories.  “Years later, when I was getting hundreds of rejection slips from publishers, what kept me going was nothing I had learned in a college classroom, but rather those two simple sentences spoken by my mother:  ‘John, God has given you a talent.  You must guard it and use it wisely.’ ”

In March 2017, Peterson lost his home and studio in a prairie fire. His response was that of Job.  “Naked I came from my mother’s womb, and naked I shall return there.  The Lord gave and the Lord has taken away.  Blessed be the name of the Lord” (1:21).  The fire did not end Hank’s adventures.

Perseverance can be your story in Christ. “In any and every circumstance I have learned the secret of being filled and going hungry, both of having abundance and suffering need. I can do all things through Him who strengthens me” (Phil. 4:12-13).

If you give one of Erickson’s books, you’ll add a new adventure story to the life of a child. But this story is about you, faith, and perseverance.  Draw from that deep well of hope and strength to live well and finish strong.

The Gift
Scroll to top