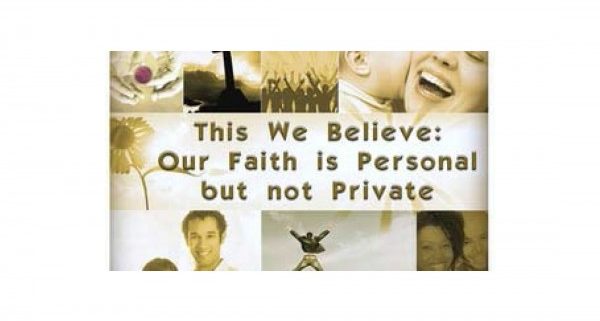 You have heard politicians say they are personally opposed to a policy, “But I don’t want to impose my beliefs on others.” That’s intended to sound noble, even humble.  It can also mean, “I have convictions but they don’t matter.”  Which doesn’t sound like convictions at all.  Seems more like political calculation than leadership.  Shouldn’t personal convictions affect your public life?

Don’t worry. This isn’t about politics, it’s really about all of us.  The answer to the question is yes, particularly for a Christian.  Faith is personal, but not meant to be private.

It is personal because it is your individual faith in a God who has revealed Himself, experienced in a community that identifies with Jesus Christ. Such faith doesn’t come pre-packaged with a baby nor is it available in bulk because you associate with believers.  Hopefully those believers follow Jesus in such a way that you want to receive his grace, personally.

Jesus explained to Nicodemus that he must be born again in order to enter the kingdom of God.  Peter wrote that Jesus “caused us to be born again to a living hope through the resurrection of Jesus Christ from the dead” (1 Pet. 1:3).  The phrase “born again” isn’t a certain type of Christian; it is normative for all who claim His name and describes something quite personal and individual.

In his book “Against the Flow,” Dr. John Lennox notes the challenge of living a personal faith in public. “Strong currents of pluralism and secularism in contemporary Western society, reinforced by a paralyzing political correctness, increasingly push expression of faith in God to the margins.”  Yet Jesus called us to be salt and light, metaphors of engaging culture in a public way.  “Let your light shine before men in such a way that they may see your good works, and glorify your Father,” Jesus said.

Peter heard Jesus say, “Everyone who confesses Me before men, I will also confess him before My Father” (Mat. 10:32). But he blew it when he denied Jesus quite publicly.  Three times.  Fortunately Jesus forgave and restored him after the Resurrection when he affirmed his faith three times publicly.  Later when arrested for proclaiming Jesus, Peter courageously declared, “We must obey God rather than men!” (Acts 5:29).  His disregard for the consequences is like “d— the torpedoes, full steam ahead!” (regards to Admiral Farragut!).

To take a stand for the Way, Truth, and Life will increasingly call for resolve, and has already caused consequences for some. No this isn’t about politics, but join me in praying for leaders, judges, and laws that do not infringe on our freedom to express our personal faith publicly.